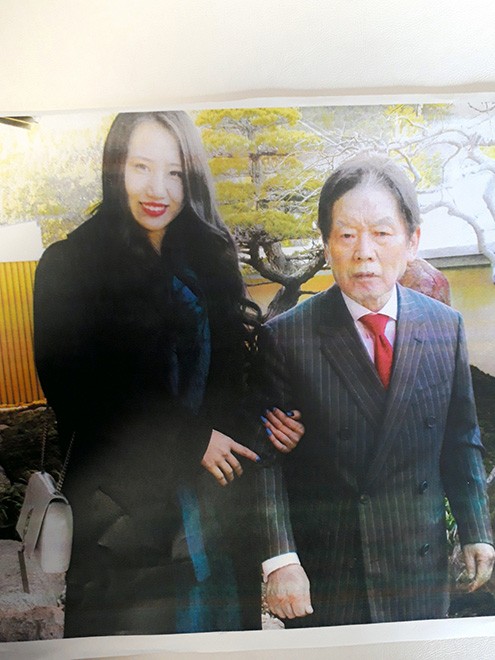 Saki Sudo and Kosuke Nozaki (Provided by a related person)

Wakayama prefectural police on April 28 arrested a 25-year-old woman on suspicion of murdering her much older wealthy husband who had described himself as the “Don Juan of Kishu” for his sexual escapades.

Sudo had said she found Nozaki unconscious on the second floor of his home in Tanabe, Wakayama Prefecture, on the evening of May 24, 2018. A female housekeeper applied cardiac massage, but Nozaki was later pronounced dead.

An autopsy revealed a lethal dose of ingredients from a stimulant drug in Nozaki’s blood and stomach, leading police to conclude he died from acute poisoning of a stimulant drug.

Police in June 2018 searched Nozaki’s home and office as well as Sudo’s second house in Tokyo.

Investigators also dug up the garden at Nozaki’s home to retrieve the body of his dog, which died 18 days before the owner’s death, to determine the cause of death of the pet.

Police said Sudo, who had obtained stimulant drugs, was alone with Nozaki at dinner on the day he died.

There was no reason for or signs that Nozaki willingly took such a large amount of drugs, police said. Because there were no needle marks on his arms, police suspect the drugs were taken orally.

According to police, Sudo reverted to her family name in February this year.

It was not clear if investigators uncovered new evidence that prompted them to arrest Sudo. But word about her approaching arrest created a media frenzy.

At 5:35 a.m. on April 28, a white van carrying Sudo in the back seat drove past a throng of reporters and photographers from a high-rise apartment where she lives.

She was flown from Tokyo’s Haneda International Airport at 8:45 a.m. to Nanki-Shirahama Airport in Wakayama Prefecture. A van then took her to the Tanabe Police Station.

Sudo was also arrested on suspicion of violating the Stimulants Control Law.

Nozaki became well known after he published a memoir, titled “Don Juan of Kishu,” in 2016. Kishu was a domain name for what is now Wakayama Prefecture.

The subtitle of the book reads, “The man who spent 3 billion yen on 4,000 beautiful women.”

And his quote on the cover says, “I became rich only to sleep with attractive women.”

According to the book, Nozaki was born in Tanabe. After graduating from junior high school, he became involved in money lending business and real estate.

He published a sequel to his memoir in April 2018, in which he revealed that he had married Sudo, a woman 55 years his junior, in February that year. It was his third marriage.

According to the Tanabe city government, Nozaki’s assets were worth about 1.3 billion yen ($11.9 million), including savings and negotiable securities. In addition, Nozaki owned unappraised land, buildings and paintings, the city said.

After his death, his “will” became known, saying he wanted to donate his entire fortune to Tanabe city. The city government started the process of receiving the wealth.

But some of Nozaki’s relatives claimed the will was invalid and filed a lawsuit against a lawyer, the executor of the will, at the Wakayama District Court.