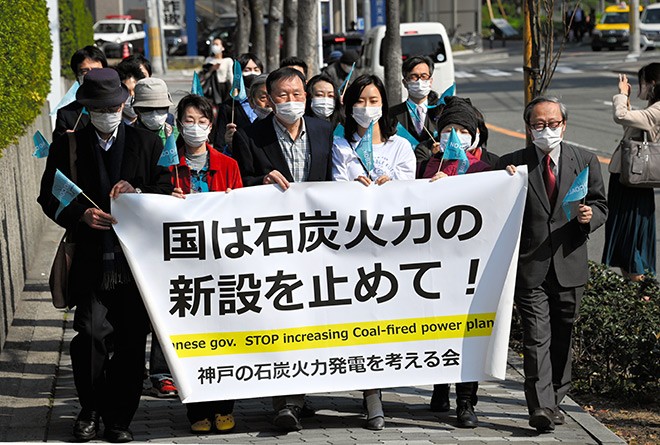 Plaintiffs suing the state over its decision to approve Kobe Steel Ltd.’s plan to expand its coal-burning thermal plant head to the Osaka District Court on March 15. They are carrying a sign that urges the government to stop building new coal-fired power plants. (Yoshinori Mizuno)

Kanden Energy Solution Co. said on April 27 it is abandoning plans to build a coal-fired thermal plant in Akita.

The end of the project means there are no longer any plans in the works for new coal plants in Japan, aside from projects that have already started.

The company, a subsidiary of Kansai Electric Power Co., said it is no longer feasible to operate coal plants, which emit massive amounts of carbon dioxide (CO2), amid the global push to go green.

Under the joint project with a subsidiary of Marubeni Corp., Kanden Energy Solution was planning to build two coal-plant units with a combined capacity of 1.3 gigawatts at Akita Port and start operating them in 2024.

Kanden Energy Solution said it will consider building biomass power plants and other types of plants instead.

The government announced last July that it plans to slash the number of low-efficiency plants that emit the largest amounts of CO2. But it said it still intends to proceed with the construction and operation of more efficient coal-fired thermal plants.

Kanden Energy Solution had planned to build a coal plant using higher efficiency ultra-supercritical technology, which is permitted under the current regulations.

But last fall, Prime Minister Yoshihide Suga announced a new goal of reducing the nation’s greenhouse gas emissions to net zero by 2050. He also pledged on April 22 to cut emissions by 46 percent by fiscal 2030 with fiscal 2013 as the base year.

J-Power said it cannot expect to profit from the project due to tighter coal-power regulations.

According to data from the ministry of trade and industry, Japan has 150 coal-fired power generation units that account for 32 percent of the country’s total power generation for fiscal 2019.

At the end of last June, there were plans to build or rebuild 17 units.

(This article was written by Kengo Kamo and Junichiro Nagasaki.)