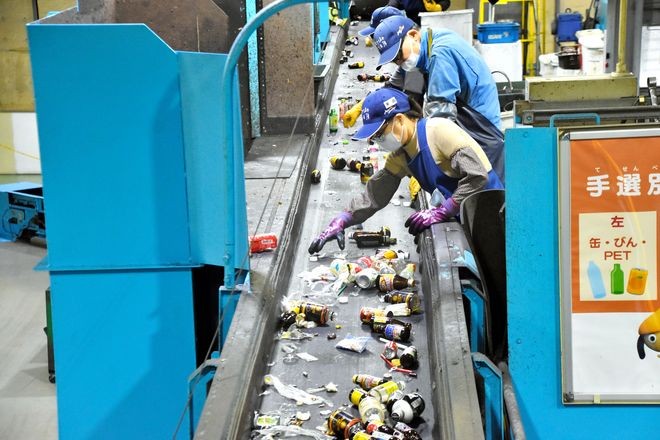 Impurities are separated by hand at a recycling facility in Saitama’s Kita Ward on April 6. (Takumi Wakai)

Beverage makers plan to set up “cleaner” recycling bins at the ubiquitous drink vending machines around Japan and improve treatment technology to raise the plastic bottle reuse ratio to at least 50 percent.

Currently, about 10 percent of beverage bottles are converted from used ones. Difficulties in removing dirt and impurities from the used bottles are largely responsible for the low rate.

The Japan Soft Drink Association on April 19 announced plans to raise the ratio of recycled bottles to all drinks sold in plastic containers from 12.5 percent in 2019 to 50 percent by 2030.

“The rate, 50 percent, is our minimum target,” said Atsuo Kono, senior executive director of the beverage organization. “We will increase the figure when techniques are established.”

Coca-Cola Co. and its bottling partners plan to improve their system to achieve a recycled bottle percentage of 50 percent by 2022, compared with 28 percent in 2020.

The JSDA is calling on small and midsize businesses to follow suit.

Beverages in plastic bottles made up 76 percent of the quantity of all drinks produced in Japan in 2020.

Plastic is fashioned from oil-derived ingredients, so carbon dioxide (CO2) emissions during manufacturing of the bottles became an environmental concern.

Although the current reuse cycle has reduced CO2 emissions connected to plastic drink bottles by 40 percent, the JSDA is moving to further decrease the amount.

Consumers in Japan are very conscious of recycling. Up to 93 percent of all plastic bottles sold were recovered for repeated use in fiscal 2019.

But the recycle bottle ratio remains at about 10 percent because it is effectively impossible to reuse bottles contaminated by fluid, cigarette butts and other sorts of dirt or waste.

Plastic drink containers must have a certain level of durability and cleanliness, given that they will likely come in contact with the drinkers’ mouths.

Treatment facilities cannot realistically wash surplus used bottles one by one. Therefore, heavily contaminated bottles that could lower the quality of recycled bottles are reportedly burned for heat generation or simply thrown away.

Recycle Plaza JB, an intermediate processing facility in Saitama that separates plastic bottles from other garbage, said non-bottle trash accounts for 10 percent of the 20 tons of waste it receives daily.

To deal with the problem, the JSDA developed a recycling bin with an opening directed obliquely downward to discourage people from inserting objects other than plastic bottles.

A verification experiment conducted last year in Tokyo showed a lower likelihood of other kinds of waste being mixed in.

Companies are also accelerating research into chemical recycling, which can break down plastic into molecules for reuse. The method is expected to make possible the reuse of slightly contaminated bottles.