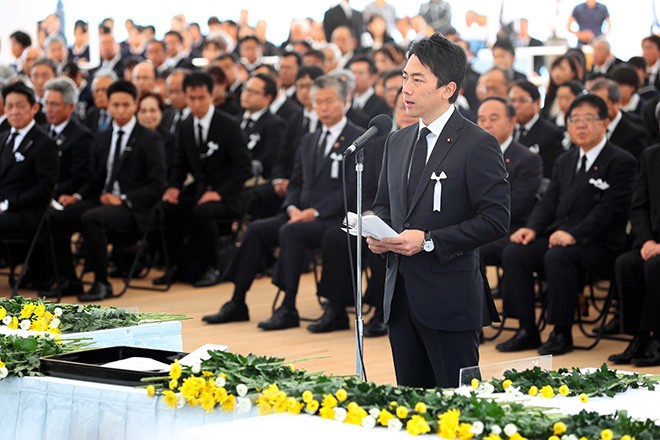 Environment Minister Shinjiro Koizumi speaks at a memorial ceremony for Minamata disease victims in Minamata, Kumamoto Prefecture, in October 2019. The annual ceremony, usually held on May 1, has since been canceled for two years due to the novel coronavirus pandemic. (Asahi Shimbun file photo)

Many victims are still waiting to be officially recognized as patients of Minamata disease, the mercury poisoning caused by industrial wastewater released into the sea off Minamata, Kumamoto Prefecture.

The government should not allow their suffering to continue any longer. It needs to go all out to give them the long-overdue relief they deserve as a step to laying a foundation for a commitment to never repeat the same mistake.

In 1956, a large number of local residents began to show symptoms of poisoning after eating fish caught in the Shiranui Sea, a calm and resource-rich inland sea in Kyushu.

On May 1 that year, a hospital in Minamata reported an influx of people suffering from symptoms of an unknown cause to a local public health center. This report is known as the first official confirmation of Minamata disease cases. May 1 this year will mark the 65th anniversary.

The neurological syndrome was caused by wastewater containing methylmercury released into the sea from the chemical manufacturer Chisso Corp.’s factory in Minamata.

As the toxic chemical accumulated in shellfish and fish, local residents who ate them without knowing the pollution suffered from mercury poisoning.

Even after the official confirmation of the disease, Chisso refused to acknowledge the link between the wastewater and the health problems. The central and prefectural governments also failed to take action to stop the release of wastewater.

In 1968, the central government finally recognized Minamata disease as caused by industrial pollution. A total of 2,283 people have since been officially recognized as patients, and some 70,000 have been acknowledged to have suffered adverse effects from the pollution.

Some 1,400 people, however, are still waiting to receive official recognition as Minamata disease patients from Kumamoto and Kagoshima prefectures. Some 1,700 are involved in lawsuits against the central government and other parties.

Behind their plight are strict criteria for official recognition as patients. In 2004 and 2013, the Supreme Court twice called for widening the scope of the relief program. But the central government has refused to revise the recognition criteria.

Its stance has made a mockery of the 2009 special measures law to expand relief to Minamata disease victims, which promises to provide “as much relief as possible” as the “final solution” to the problem.

The government must pay more serious attention to what patients say and take such steps as reviewing the recognition criteria and expanding the relief program.

It is also vital to conduct health surveys of local residents as provided by the special measures law. No such surveys have yet been carried out.

Private-sector health surveys by doctors and other experts have detected symptoms similar to those of recognized patients even among residents who do not live in the areas covered by the law or do not belong to the age groups eligible for the relief program.

It is critical to cover a wide range of people in health surveys prescribed by the law, while seeking cooperation from private-sector experts.

The lapse of 12 years between the official confirmation of cases in 1956 and the recognition of the syndrome as an industrial pollution-caused disease in 1968 allowed for an outbreak of Niigata Minamata disease, a mercury poisoning case caused by wastewater released into a river in Niigata Prefecture by Showa Denko KK.

This painfully underscored how inaction on the part of policymakers and businesses involved could result in dire consequences.

Nearly 90 percent of officially recognized Minamata disease patients have already passed away. There is not much time left for sufferers still living.

Patients and their families have devoted efforts to passing down stories about their suffering to prevent pollution and environmental destruction.

Their efforts have inspired literary works and films, helping to boost international awareness of the health hazards posed by mercury pollution.

The 2017 Minamata Convention on Mercury, an international treaty designed to protect people from mercury pollution, contains the word “Minamata” in its name and preamble because of a proposal from the Japanese government.

Environment Minister Shinjiro Koizumi, who took office in 2019, has repeatedly said his ministry has its origin in policy responses to Minamata disease. The government should demonstrate its sincere commitment to this view.