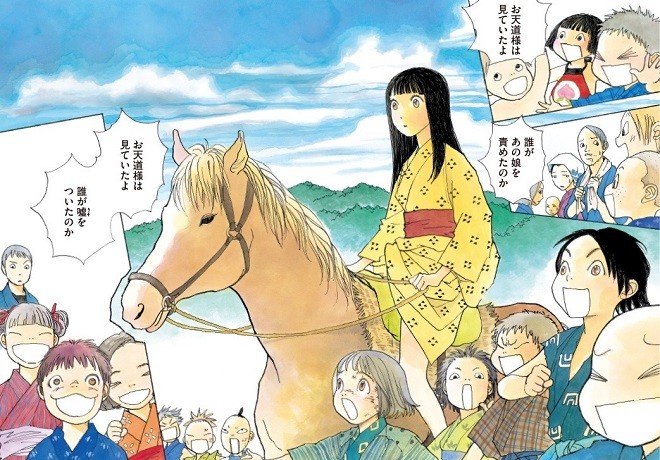 The Originality Prize, given for fresh talent and novel modes of expression, went to manga writer Kanehito Yamada and illustrator Tsukasa Abe for their "Frieren: Beyond Journey’s End."

The awards ceremony will be held June 3 at The Asahi Shimbun's head office in Tokyo’s Tsukiji district.

Each winner will receive a bronze statue. The winner of the Manga Grand Prix will also take home 2 million yen ($18,400), while the Originality, Short Story and Asahi Special Prize winners will each receive 1 million yen.

Manga titles published or released in Japan in 2020 were eligible for the awards. For the top Manga Grand Prix, eight judges each awarded a total of 15 points and no more than five to any one manga. Nine titles with the most points advanced to the final round of deliberations conducted online, along with one title that was ranked first in the recommendations by bookstore staff and many experts.

"Land" centers around An, a girl who grew up in a village known as "Konoyo" (this world), where large statues of deities stand in its four corners. She breaks the local taboo and sees "Anoyo" (another world) on the other side of the mountains. While the villagers' world is shaken by this development and thrown into confusion and conflict, An and her companions head out for a new future.

Kazumi Yamashita made her professional debut in a manga anthology for girls in 1980 before writing for comic magazines for young adult men.

She found success with "The Life of Genius Professor Yanagizawa" and "Fushigi na Shonen" (Wonder boy), both of which feature a stand-alone story for each episode. But she broke a new ground with "Land," an epic tale that spans 11 volumes.

"I was told to 'finish it with the third volume' because it didn't generate much interest when I started to serialize it," Yamashita said. "But it then began to sell unexpectedly well and survived, possibly because readers were surprised by the ending of the first volume. I'm glad I was able to complete the story to the very end."

Issues that confront modern society are incorporated into the riveting story; for example, catastrophic disasters, radioactive waste, inequality and senility. The artist also found herself ahead of the times when she presented a city under "lockdown" following the emergence of an unknown virus.

"I was dumbfounded. I saw the news and went, 'What's going on?'" she said.

When she learned that "Land" had been nominated for the prize, Yamashita said she thought it was perhaps because the manga's theme does not differentiate too far from Tezuka's works. However, it isn't "humanitarianism," she said.

"It's nihilism. Or 'nothingness,' maybe," she added. "With or without advanced science and civilization, the nature of humanity will be the same. I think Osamu Tezuka looked at humanity from a distanced perspective, as if to say, we are who we are after all."

Written by Kanehito Yamada and illustrated by Tsukasa Abe, "Frieren: Beyond Journey’s End" centers around Frieren, a mage from a tribe with longevity. She sets out on a journey to revisit the traces of the war during which she defeated the demon king.

Yamada made his professional debut after winning an award for new talent in 2009.

"It's not a flashy story, but I'll keep working hard to entertain readers," he said.

Abe made his commercial debut in 2017.

"This title made me realize the guidelines for my life as an illustrator," the cartoonist said.

Hiroko Nohara's "Kieta Mama-tomo" tells the story of a group of mama friends whose relationships become fraught with friction when one of them disappears. "Tsuma ga Kuchi o Kiite Kuremasen" presents a situation where the wife has stopped talking to her husband, which is told from each other's perspective.

The author made her professional debut with "Musume ga Gakko ni Ikimasen" (My daughter won't go to school), published in 2013.

"I was excited to read 'Mighty Atom' when I was little, and I used to sing Atom's song (from the animated TV series adaptation titled 'Astro Boy') when I was raising my child," she said. "This award is my third Atom. I thought I've been encouraged by Atom all my life."

"I'm deeply grateful to those who have supported me, all of those who involved in publishing my comics and all production members of the anime adaptations," the author said.