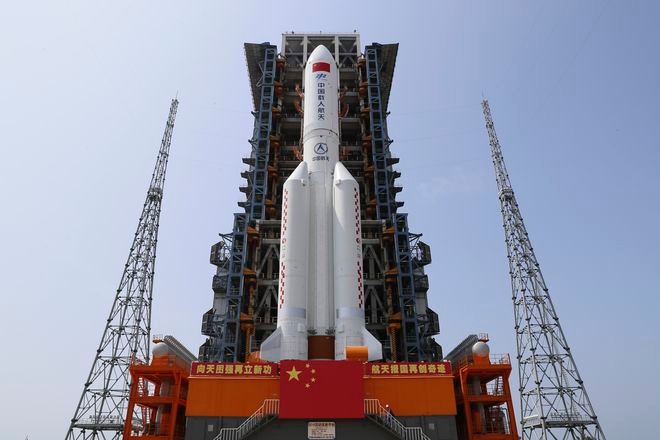 In this photo released by Xinhua News Agency, the core module of China's space station, Tianhe, on the the Long March-5B Y2 rocket is moved to the launching area of the Wenchang Spacecraft Launch Site in southern China's Hainan Province on April 23, 2021. China plans to launch the core module for its first permanent space station this week in the latest big step forward for the country’s space exploration program. The Tianhe, or “Heavenly Harmony” module is set to be hurtled into space aboard a Long March 5B rocket from the Wenchang Launch Center on the southern island of Hainan. The launch could come as early as Thursday night, April 29, 2021 if all goes as planned. (Guo Wenbin/Xinhua via AP)

BEIJING--China on Thursday launched the core module for its first permanent space station that will host astronauts long-term, the latest success for a program that has realized a number of its growing ambitions in recent years.

The Tianhe, or “Heavenly Harmony," module blasted into space atop a Long March 5B rocket from the Wenchang Launch Center on the southern island province of Hainan, marking another major advance for the country’s space exploration program that has chalked up a series of accomplishments in recent months.

The launch begins the first of 11 missions necessary to construct and provision the station and send up a three-person crew by the end of next year.

China’s space program has also recently brought back the first new lunar samples in more than 40 years and expects to land a probe and rover on the surface of Mars later next month.

Minutes after the launch, the structure opened to expose the Tianhe atop the the core stage of the rocket, with the characters for “China Manned Space” emblazoned on its exterior. Soon after, it separated from the rocket, which will remain in orbit for about a week before falling back to Earth.

The space program is a source of huge national pride, and Premier Li Keqiang and other top civilian and military leaders watched the launch live from the control center in Beijing.

At least 12 astronauts are training to fly to and live in the station, including veterans of previous flights, newcomers and women, with the first crewed mission, Shenzhou-12, expected to be launched by June.

Tianhe will have a docking port and will also be able to connect with a powerful Chinese space satellite. Theoretically, it could be expanded to as many as six modules.