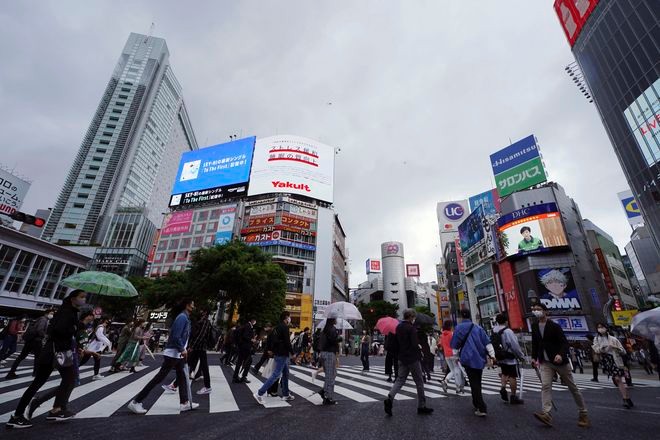 People wearing protective masks to help curb the spread of the coronavirus walk across a pedestrian crossing at the beginning of Japan's "Golden Week" holidays on April 29 at Shibuya district in Tokyo. (AP Photo)

New COVID-19 cases in Tokyo exceeded 1,000 for the first time in about three months on April 29, fueling fears a more contagious variant has become the dominant strain in the capital.

Metropolitan government officials confirmed 1,027 new cases, bringing the daily average for the week until April 29 to 782.1, a 14.3 percent increase over the average for the previous week.

New COVID-19 cases began surging in Tokyo from the end of last year during the third wave of infections. The daily figure hit a record high 2,520 on Jan. 7, followed by two days each with more than 2,000 new infections.

The number of cases then began declining, and on Jan. 28, 1,065 cases were reported, the last time the capital confirmed more than 1,000 new infections.

The daily figures dropped to levels between 100 and 400 by late February.

However, the flow of pedestrian traffic in Tokyo began picking up again, likely because people became weary of anti-virus measures, such as refraining from outings or meals with friends and colleagues.

That led to another steady increase in cases from about March 10.

The recent surge in Tokyo has been fueled by the N501Y variant strain that had earlier spread rapidly in the Kansai region of western Japan.

According to tests conducted by the Tokyo Metropolitan Institute of Public Health, 59.6 percent of patients in the capital tested until April 25 were infected with the N501Y strain.

The figure for the previous week was 32.8 percent and 37.8 percent two weeks earlier, showing that variant strain is quickly becoming the main one in Tokyo.

The variant is said to have a much higher effective reproduction number, which indicates the average number of people a single COVID-19 patient will infect. The N501Y strain had a 1.43-fold to 1.9-fold higher figure than the original strain.

The mutant strain is also more likely to cause serious symptoms among infected young people. Health experts urged caution because all age brackets were at risk.

Infection clusters of the variant strain have been found at Tokyo day care centers and elementary schools, in addition to hospitals and facilities for senior citizens.