Japan’s minister of loneliness gets flood of foreign media interviews 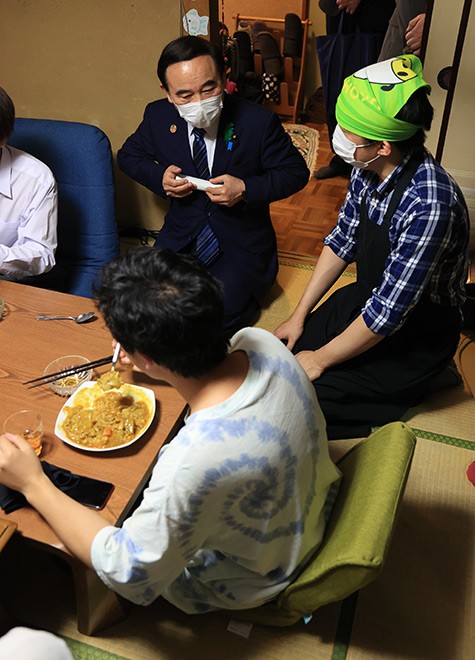 Tetsushi Sakamoto, the minister of loneliness, second from left, visits a cafeteria that provides meals to impoverished children in Tokyo on April 21. (Pool)

Japan’s minister of loneliness isn’t lonely these days, drawing much attention from media outside the country eager to know exactly what his job entails and if it’s meeting with success.

Tetsushi Sakamoto, responsible for dealing with problems of loneliness and isolation has been deluged with interview requests since taking the job in February, he said on April 27 at a news conference after a Cabinet meeting.

Since March, he’s been interviewed by reporters from Russia and Spain and held an interview with U.S. media on April 27.

Media from India also want to talk to him, he said.

“Each country has faced problems (related to loneliness) even though how serious they are differs around the world,” he said. “They are interested in how Japan is trying to tackle the issue through trial and error.”

A reporter from South Korean station KBS TV, who interviewed Sakamoto, told The Asahi Shimbun, “Solitary deaths have become a problem even in South Korea, so Japanese efforts would be a mirror for my country.”

“I wanted to ask questions on Japan’s sense of crisis that led to it creating a ministerial portfolio and the preparations for appointing the minister and establishing a dedicated organization,” the reporter said.

“The issue of solitary death is really serious in Japan, which can be understood from the fact that the Japanese word for it, ‘kodokushi,’ is becoming used as an English word,” said Junko Okamoto, 53, a specialist on problems of loneliness and isolation. "Japan is being closely watched for what steps it will take to tackle the issue."

The government plans to conduct a survey to grasp the current situation in the country on loneliness and isolation, the results of which will be released by the end of March 2022.

Prime Minister Yoshihide Suga appointed Sakamoto to the post in February to combat the issues of worsening loneliness and isolation due to the coronavirus pandemic, and a newly established section of the Cabinet Secretariat was dedicated to the purpose.

According to the section, in 2018, Teresa May, then Britain’s prime minister, established the world’s first minister specializing in loneliness and isolation issues.

Sakamoto said that Japan is only the second country to have done so, to the best of his knowledge.