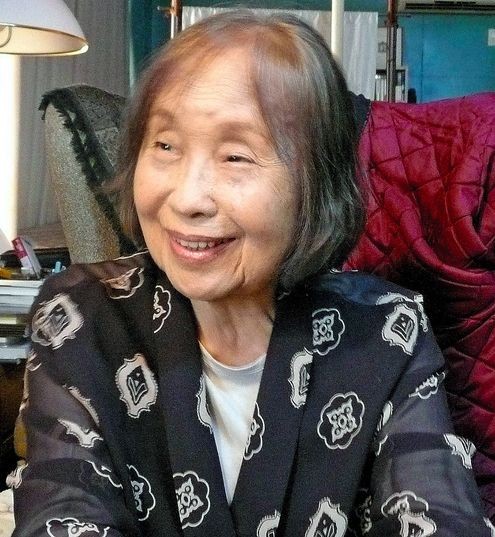 Rows of black banners, emblazoned with a Chinese character denoting “grudge” in white, feature in Kazuo Hara’s “Minamata Mandala,” a documentary feature film that will be released in Japan this year.

This lengthy work's running time is in excess of six hours.

Cases of an unknown disease started appearing in the early 1940s. Before long, cats were seen having lethal convulsions on the local beach, and seabirds were dropping dead from the sky.

After countless negotiations and legal battles, about 1,700 people are still in litigation, demanding compensation and official recognition as Minamata disease sufferers.

The film focuses on a female patient, whose life as well as her family’s were ruined by Chisso and who felt her hatred of the company knew no bounds. But she eventually had a change of heart and decided to forgive Chisso.

“It is painful to hate someone. It really is. But if you forgive, you won’t be in pain more.”

These words of profound wisdom by the Minamata disease patient were introduced in the film by writer and activist Michiko Ishimure (1927-2018), who authored “Kukai Jodo” (Paradise in the Sea of Sorrow: Our Minamata Disease).

The scene in the film jogged my memory of my past interview with Ishimure, who told me: “We talk about environmental pollution, but it has always been humans polluting the environment. The toxin is in the human race itself.”

I still recall vividly how she enunciated each word slowly, eyes closed.

Mercury poisoning has caused grave damage around the world. An international treaty called the Minamata Convention on Mercury came into effect four years ago and was ratified by numerous countries.

Efforts to save the oceans from plastic waste are also gaining momentum, and more people today are awakening to humanity’s responsibility for polluting the seas, rivers, air and ground.

Once called an “origin of environmental pollution,” Minamata disease was officially confirmed on this day 65 years ago.

The film’s message--that “Minamata disease is still not over”--remains as heavy as ever.