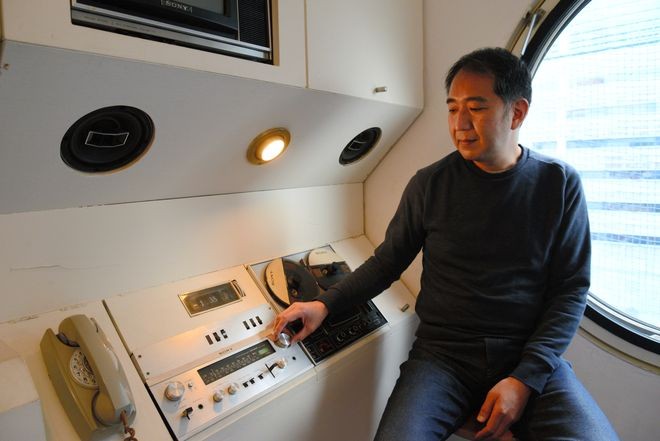 “The stereo system also remains as it was installed in the 1970s, but I find it more charming,” Tatsuyuki Maeda, head of the Nakagin Capsule Tower Preservation and Restoration Project, said on March 27 in Tokyo’s Chuo Ward. (Yusuke Saito)

The novel coronavirus pandemic has set back or even scrapped the latest plans for the Nakagin Capsule Tower building, the futuristic-looking, architectural marvel in Tokyo’s Ginza district.

The building, saved earlier from a demolition project, once again finds itself in limbo. Tenants still live there but some are moving out.

Renovation and conservation plans have come and gone. And now, the tower is on the block, but no buyers have emerged during the health crisis.

Designed by leading architect Kisho Kurokawa (1934-2007), the tower was completed in 1972 and known as a representative work of the “Metabolism” architecture movement, which emphasized buildings and cityscapes interchangeable in accordance with social changes.

The building has also been associated with the U.N.’s Sustainable Development Goals, even though it was erected long before SDGs existed.

“This is an architectural structure that can be maintained semi-permanently by replacing its parts, and it was a symbol of what is now called the SDGs. The times have finally caught up with the structure," said Tatsuyuki Maeda, 54, who has spearheaded the Nakagin Capsule Tower Preservation and Restoration Project.

The 11-story building (part of it is 13 stories high) comprises 140 box-shaped capsules stacked on top of each other. Each capsule is about 10 square meters in size, with a round window 130 centimeters in diameter.

“It feels like I’m on board a flying saucer,” Koe said. “I can feel a different flow of time from the outside, and I love the time I spend here.”

Koe posts videos on social media three to four times a week to the tune of anime songs. Her room features a life-size figure of Rei Ayanami from “Neon Genesis Evangelion,” in addition to large figurines of monster Hedorah, aliens and other characters.

Koe first caught sight of the distinctive structure as she was heading to Ginza on the Metropolitan Expressway after she came to Tokyo from Osaka in 2001.

“I saw box-shaped rooms, each with a large round window, attached on all sides of the building, looking exactly like an unidentified flying object. I was wondering what it was," she said.

Koe later learned that it was one of Kurokawa’s major works, and that rooms could be rented by the month.

She moved into the building in February 2019.

“Every moment I’ve spent here is special,” she said.

The capsule rooms are occupied by people from a variety of backgrounds--an architect, a film producer, an operator of a startup--for a variety of purposes.

A 43-year-old editor, who bought a room in 2015, uses it as a studio to store reference materials and transcribe tapes.

“Every capsule looks identical and is standardized. That’s all the more reason why the differences among the tenants stand out,” he said. “It’s interesting because their feelings for the building are also different and diverse.”

Each capsule comes with furniture and audio equipment. The rooms were initially intended to be replaced every 25 years. So far, that has not happened even once.

Many talks were held about renovating the building after it fell into disrepair.

But a company chosen for the demolition work went bankrupt in 2009 following the collapse of U.S. investment bank Lehman Brothers.

Around 2010, Maeda started activities to conserve the building, offering monthly leases for tenants and hosting tours to promote its charms.

A real estate company is the landlord of the premises and owns the majority of the rooms. It had been in negotiations with interested parties to sell the property, including a foreign company that intended to conserve and use the tower.

But negotiations were interrupted last year because of the pandemic.

Worried that the building could deteriorate further, the real estate company and the capsule owners adopted a resolution in March to sell the land plot ahead of the building.

They have yet to find a buyer.

Some residents have started moving out of their rooms. New tenants are not accepted.

“We’re hoping that there will be a company willing to buy the entire building to conserve it,” Maeda said. “But it may be difficult considering (the cost of) the Ginza location and the financial difficulty to replace the capsules.”

He and others were hoping that the Nakagin Capsule Tower building could be designated as a World Heritage site.

But their dream was shattered by the pandemic.

Had the Tokyo Olympic and Paralympic Games taken place last summer as scheduled, an international conference on architecture would have been held in Tokyo the following September. The tower was supposed to be introduced during the event, which could have provided momentum for conservation efforts.

“It feels like the coronavirus pandemic destroyed the opportunity for people from overseas to see and experience this building to reconfirm its value,” Maeda said.

Earlier this year, a senior high school student rented a room with a monthly lease contract after saving money from her part-time job. She stayed at the room with her father.

“There are 140 stories in 140 rooms. I want to pass down these stories to future generations,” Maeda said.