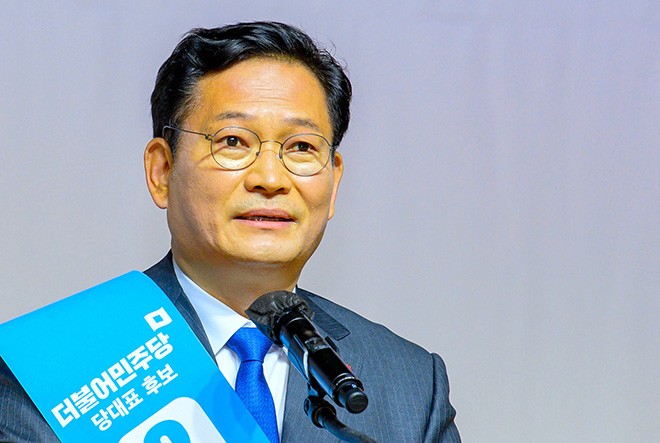 SEOUL--South Korea's ruling Democratic Party elected a blunt-speaking political veteran who advocates a hard line against Japan as its new leader on May 2.

He will oversee the party’s efforts to win in the presidential election slated for March 2022.

Song maintains a distance from those close to President Moon Jae-in, and his election victory is a sign of Moon’s weakened authority within the party.

“We need to keep moving forward and show no hesitation,” Song said after his win in the party convention. “I will lead from the front for South Korea’s leap (into the future). But first, let’s win (the presidential election).”

Lawmakers and the South Korean media predict the Moon administration will be nothing more than a lame duck in the months ahead.

The ruling party suffered stunning defeats in mayoral races held in Seoul and Busan in April, putting it under intense pressure to find a new leadership lineup ahead of the presidential race next year.

Song is a veteran lawmaker, having been elected five times.

He will not run in the presidential election himself, but spearhead the campaign for the party’s candidate.

A diplomatic source in Seoul said Song will most likely urge Moon to adopt a harsher line against Japan to broaden the president's public appeal.

If the ruling party’s candidate wins, Song will most likely receive a reward-oriented appointment.

Song is famed for his forthright manner of speaking and is known for his tough approach toward Japan.

Most recently, he sharply criticized Japan’s decision to dump treated contaminated water from the crippled Fukushima No. 1 nuclear power plant into the ocean.

“It is awful egotism, and (Japan) is about to commit a crime that is unacceptable to all mankind,” Song wrote in his Facebook page on April 13.

With regard to the contentious “comfort women” issue, Song wrote on his Facebook page in February 2019 that Shinzo Abe (the prime minister at the time) and the emperor “should offer apologies for victims on behalf of Japan.”

Song is also critical of the way Washington exerts high-pressure tactics against North Korea and Iran over their nuclear programs when the United States itself is a leading nuclear power.