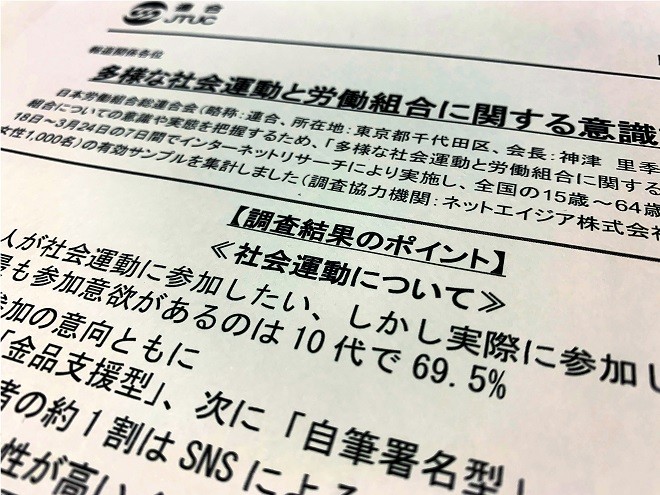 The results of a Rengo survey on people’s views on various social movements and labor unions that asks those in their teens to 60s about a wide variety of topics, such as sharing information on social media (Mari Fujisaki)

Of the respondents between the ages 10-19, 35.5 percent said they had "engaged" in related activities, second only to respondents in their 60s, at 39 percent.

Despite this, young Japanese negatively view demonstrations, boycotts and other main activities in traditional social movements and prefer to stick to using social media as a way to bring about change, the survey by Japan's largest labor organization, Rengo (Japanese Trade Union Confederation), reveals.

A total of 69.5 percent of those aged 10 to 19 “want to join” social movements, the survey found, far above the average for all age groups of 55.9 percent.

Of all generations including those between ages 10-19, 41.7 percent described demonstrations as “forcing opinions on others and causing trouble to surrounding people,” while 33.1 percent said the same about boycotting.

A total of 52.5 percent said they see demonstrations as “giving bad impressions such as being terrifying and extreme.” Some 42.4 percent said boycotting had the same effect.

The negative impression rates for demonstrations and boycotts were even higher than the figures for other kinds of activities related to social movements.

“Challenges remain given the current situation where people prefer activities that can be done by a single person, because the trend could affect the sustainability of campaigns,” said Kyoko Tominaga, an associate professor of sociology at Ritsumeikan University, in a written comment on the survey's results.

“Discussions should be held over how to present the significance of such social movements as organized actions and protests.”

The findings corroborate through numerical data the notion that those in their teens through mid-20s are taking advantage of social media to raise the issues of climate changes and gender equality in Japan.

“The social campaign participation rate is higher among people in their teens to 20s, though the percentage is down from that for those in their 60s toward the thirty-something group,” Tominaga commented.

“This vividly reminds me of the recent wave of public drives by generations referred to as Generation Z and millennials across the globe.”

Haruhisa Yamaneki, head of Rengo’s general movement promotion division, expressed his concerns over people having a strong aversion to demonstrations and boycotts.

“There's a wide perception gap between movement organizers and citizens,” Yamaneki said in a statement. “To eliminate the gap, we need to improve our ways of setting campaign themes and expressing views."

The survey was Rengo's first on public social campaigns, and took into account the fact that amid the novel coronavirus pandemic, more arguments are being made on social networking sites over various problems in society.

The study covered a range of activities from traditional demonstrations, petition drives and donations to crowdfunding, online petitions and sharing information on social media with hashtags.

Of the respondents between the ages of 10-19, 10.5 percent shared information on social networking sites through hashtags. The percentage was the highest among all groups.

Still, 17.5 percent of respondents in that age group made the most donations and contributions offline, on the street, at stores and elsewhere outside the internet. It was also the highest among all age groups.

Less than 30 percent of respondents in their 20s to 40s said they had participated in social campaigns. The average for all generations was 27.5 percent.

The research was conducted on the internet in March and received responses from 2,000 men and women aged between 15 and 64 nationwide.