Sapporo seeks help with virus, but pre-Olympic event will go on 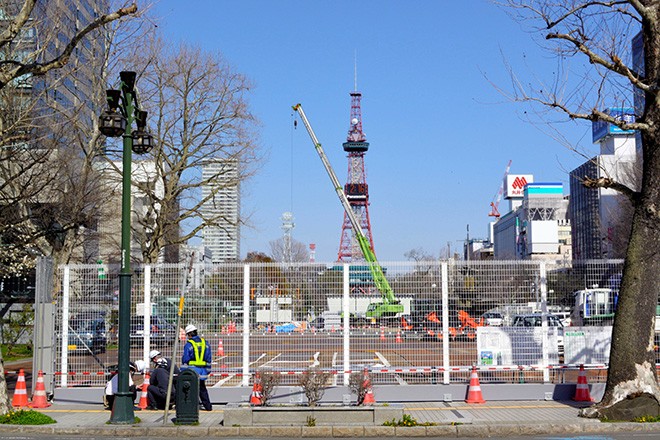 Construction work is under way at Sapporo Odori Park, the starting and ending point for the Tokyo Olympic marathon events, in Sapporo’s Chuo Ward on April 27. (Noboru Okada)

SAPPORO--City officials here will impose stricter measures to battle the growing COVID-19 crisis, but some of the loudest public groans are over the decision to still hold a pre-Olympic event in the Hokkaido capital.

Hokkaido Governor Naomichi Suzuki and Sapporo Mayor Katsuhiro Akimoto held an emergency meeting on May 3 and agreed to ask the central government for pre-emergency “manbo” measures for the city.

Sapporo confirmed a record 246 new infection cases on May 2, as well as five deaths. It was the first time the daily infection tally exceeded 200 in the city. The new infection count for May 3, a national holiday, was 88.

“Manbo is the best card we can play at this moment,” Suzuki said.

The formal request will be made on May 5, the day the Hokkaido-Sapporo Marathon Festival 2021, an Olympic rehearsal event, is scheduled to run.

The decision by Olympic organizers not to call off the event has drawn intense criticism from residents in the city.

Shuji Miura, a 55-year-old manager of a cafe located along the route, said he has complied with the Hokkaido government’s requests for eateries in Sapporo to close by 9 p.m. from April 27 to May 11.

“We are doing what we can to contain the coronavirus,” he said. “But it will be completely useless if they hold the rehearsal event before we see any result.”

A 47-year-old woman who runs a confectionary shop in Sapporo’s Susukino nightlife district expressed indignation toward the organizers.

“I can’t come up with any good reason why they have to push it through when the infection numbers are rising this much,” she said.

Under the new measures, bars and restaurants will likely be asked to close earlier, at 8 p.m.

Sapporo officials have also decided to close public facilities and cancel certain events for the remainder of the Golden Week holidays to prevent the health care system from collapsing.

Mayor Akimoto underscored the severity of the situation at a news conference on May 2.

“Infections are rapidly spreading, and we are in a critical situation,” he said.

He urged local residents, “Please refrain as much as possible from going outdoors.”

To people outside of Sapporo, he said, “Please try as hard as possible not to come to Sapporo.”

However, hundreds of participants are expected to enter Sapporo for the pre-Olympic event, even though the Tokyo Olympic organizing committee and local officials earlier decided to ban 2,500 citizens from participating.

About 120 “elite” runners, including Japanese national team members, are billed to compete in a half-marathon, as well as 50 or so top runners in a 10-km race, both using the Olympic marathon course. Some of the runners are expected to come from overseas.

Yasuo Mori, a top official of the Tokyo Organizing Committee of the Olympic and Paralympic Games, said the rehearsal event “is extremely important to get ready to operate the (Olympic marathons).”

Organizers, including Hokkaido and Sapporo officials, will test security and anti-virus measures using the Olympic course, which starts and ends at Sapporo Odori Park.

Local police will also do a necessary walk-through. They are expected to be dispatched to control crowds, enforce traffic rules and check their anti-terrorism measures.

The Olympic marathon course runs through famous sightseeing spots in the city, such as the Susukino district and the campus of Hokkaido University.

Organizers have insisted that a rehearsal event is necessary because it is an urban setting with heavy traffic of people and vehicles.

But what if no spectators show up for the pre-Olympic event?

The area surrounding Sapporo Odori Park will be closed off during the trial runs.

“Anti-virus measures need to be made based on guidelines regarding spectators,” Akimoto said on April 28. “So we cannot test that part at the (rehearsal event).”

He also urged residents to refrain from watching the test marathon along the route.

“Please view it on TV at home,” he said.

For the Olympic marathons in August, citizen volunteers will be called up to stand along the route with signs warning the public to keep a safe distance from each other to lower the risk of virus infection.

However, Olympic organizers have not decided on whether any spectators will be allowed at events at the Games.

Asked late last month if the Olympics should be held in the first place, Akimoto declined to answer. But he said it is “extremely important” that the organizers’ anti-virus measures, such as the number of allowed spectators, to hold the Games safely “are convincing to the public and local residents.”

A 24-year-old female company employee who came to see Odori Park, where construction for the Olympics are under way, appeared unconvinced.

“Fewer and fewer people are interested in the Olympics because of the pandemic,” she said.