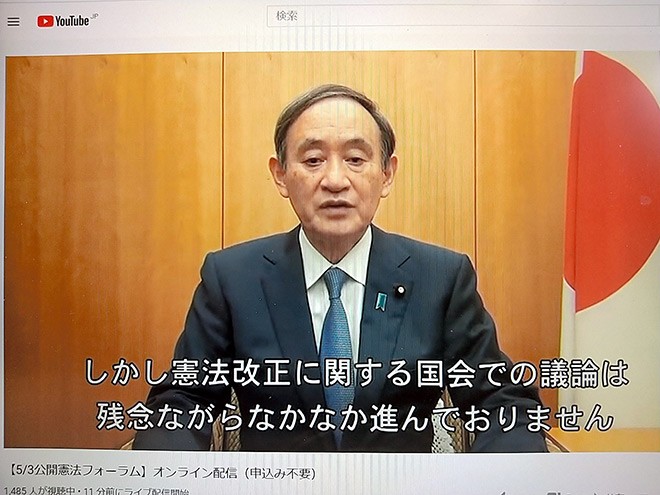 Prime Minister Yoshihide Suga delivers a video message to a gathering on May 3 sponsored by a group promoting constitutional revision. (Captured from YouTube)

Prime Minister Yoshihide Suga on May 3 used some of his strongest language concerning planned revisions to the pacifist Constitution in an apparent appeal to conservative elements of the ruling Liberal Democratic Party.

Suga’s predecessor, Shinzo Abe, made no secret of his strong desire to revise the Constitution.

But since Suga took over as prime minister in September 2020, he has simply expressed expectations that Diet debate on the issue would progress in response to questions from the media and lawmakers.

That changed on May 3, which was Constitution Day, a national holiday.

In a video message delivered at a gathering of a group pushing constitutional revision, Suga brought up the novel coronavirus pandemic.

“Interest is heightening on the need to prepare for a state of emergency, such as dealing with the pandemic,” Suga said. “In order to protect the lives and safety of the public during emergencies, such as major natural disasters, an extremely important and serious issue is how to position within the Constitution the roles to be played by the people and the state.”

The LDP has called for four constitutional amendments, including the introduction of a state of emergency article, which could restrict the public’s rights during contingencies, and wording within war-renouncing Article 9 that clearly states the necessity of having the Self-Defense Forces.

Suga touched upon the fact that more than 70 years have passed since the Constitution was enacted.

“Parts that no longer match the current times or are insufficient should be revised,” he said.

Suga said the SDF must be written into the Constitution, given that much of the public is grateful for the efforts of SDF members who are dispatched to help after natural disasters or to deal with the novel coronavirus pandemic.

He also said an important first step is to pass legislation to revise the national referendum law and establish the procedures for actually amending the Constitution.

The ruling coalition is seeking to vote on the measure at the May 6 session of the Lower House Constitution commission.

Suga may have taken the more conservative stance in his May 3 video message because he is thinking ahead to this autumn, when his term as LDP president ends and a Lower House election will also have to be held.

Leaders of opposition parties took part in an online session on May 3 sponsored by a group opposed to what would be the first amendments to the postwar Constitution.

Yukio Edano, head of the Constitutional Democratic Party of Japan, said there was no need for a new state of emergency clause in the Constitution because limits on personal rights are already possible if they improve public welfare.

“The reason the appropriate measures have not been implemented is due to baseless optimism and the policy decision to not place the utmost priority on protecting the lives and livelihoods of the people,” Edano said.

He said the ruling coalition was trying to pin the blame on the Constitution, which is totally unrelated to what needs to be done.

While Edano did not mention the measure to revise the national referendum law now before the Diet, Kazuo Shii, the head of the Japanese Communist Party who appeared at the same gathering, called for blocking the legislation, saying it would only set the stage for constitutional revision.

(This article was written by Naotaka Fujita, a senior staff writer, and Maho Yoshikawa.)