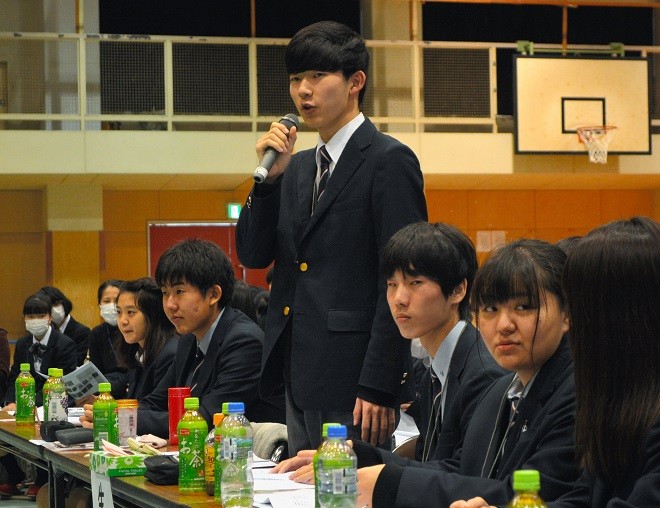 A student addresses a meeting of teachers, parents and students to discuss a revision of school rules and other issues at Daito Gakuen High School in Tokyo's Setagaya Ward in November 2019. (Asahi Shimbun file photo)

School rules that don't feel right need to be talked over until everybody can agree on what should be changed, and how.

This approach to school life, promoted by the children themselves in some cases, or directed by schools and boards of education in others, is beginning to be widely adopted.

Whichever the case, school rules have a strong bearing on the daily lives of pupils and students. Being involved in the process of determining whether to scrap, continue or add new rules must surely be viewed in the context of helping youngsters to mature into next-generation leaders of society.

May 5 is "Children's Day" in Japan. This should also be a day for adults to think about their own roles in encouraging children to be autonomous while watching over them and offering advice.

Many of today's draconian rules at junior and senior high schools hark back to an era of classroom violence that raged 40 or so years ago. Based on the premise that "disorderly hair and dress reflect a disorderly mind," the rules prescribed everything from hairstyle to the color of underwear in minute detail.

Back then, many parents believed that the safest schools to send their children to were those that kept them under strict supervision. Also fanning this tendency to welcome harsh rules was an escalation of rivalry among schools following the introduction of the so-called school choice program, in which parents and students can choose public schools free of geographical limitations of their school district.

But a lawsuit filed in 2017 became the catalyst for a review of the way school rules are enforced.

The lawsuit about an Osaka public senior high school's hairstyle rules attracted public attention because it highlighted the existence of excessively rigid school regulations around the nation.

Pupils in some schools were forced to wear white socks, while others banned them outright.

In other cases, students were made to remove their underwear if the color or design deviated from the rules.

Some schools even required new students to state their natural hair color in advance, so they could be taken to task if they dyed their hair later.

The enforcement of such appallingly irrational rules was a clear violation of basic human rights.

What can be done to close the gap between outrageous school rules and what is accepted as common sense in society?

At Otsuchi High School in Iwate Prefecture and Yasuda Girls' Junior and Senior High School in Hiroshima Prefecture, students and teachers engaged in repeated discussions with the support of Katariba, a specified nonprofit corporation, to revise school regulations concerning stocking colors and bringing smartphones to school.

The students were delighted their actions led to tangible results, and the teachers experienced the satisfaction of watching their charges assert their opinions with confidence.

In Saga Prefecture, many schools balked at taking immediate action, so the board of education there directed a revision of rules concerning underwear and natural hair color at prefectural schools.

In the city of Kumamoto, the municipal board of education revised certain regulations ahead of initiating an overall review of school rules at the start of this academic year in April. The project covers all municipal schools, including those at elementary level. The children are also taking part in the process.

Japan Youth Conference, which is calling for national policies that give young people a greater voice, is urging schools to actively involve children in matters of school administration.

The education ministry surely could not oppose that as it promotes education as a means for grooming sovereign citizens. We hope the ministry will help create a better environment for front-line educators to endeavor and give them the backing they need.