Number of children in Japan shrinks for 40th straight year 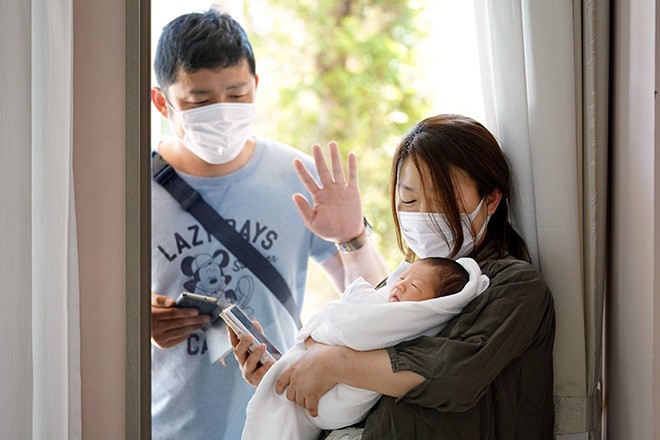 A man greets his newborn baby through a window on April 30 in Satte, Saitama Prefecture. The clinic restricts visitors to prevent novel coronavirus infections. (Tsubasa Setoguchi)

Japan’s population of children under 15 shrank by 190,000 from a year earlier to an estimated 14.93 million as of April 1, the 40th consecutive year of decline, internal affairs ministry data showed.

Children in that age group account for 11.9 percent of the entire population, the lowest level in the world, according to the ministry. The figure was 0.1 percentage point down from the previous year.

The percentage has now dropped for 47 straight years.

On the other hand, people 65 or older account for 28.9 percent of the population, up 0.3 percentage point from the previous year.

Although the government has long vowed to battle the demographic change, the numbers show that Japan’s declining birthrate and the graying of society have progressed further.

The ministry released the numbers to mark Children’s Day, a national holiday, on May 5.

The younger the age, the smaller the ratio of the overall population.

In 1950, children under 15 accounted for 35.4 percent of the population because of the first baby boom.

But the ratio started declining.

The ministry compared Japan’s ratio of children with those in other countries with populations of 40 million or more.

Japan’s percentage was the lowest, although the ministry said it was difficult to do a strict comparison because the timing of the countries’ population surveys was different.