Cenotaph tribute to POWs killed in A-bombing of Nagasaki 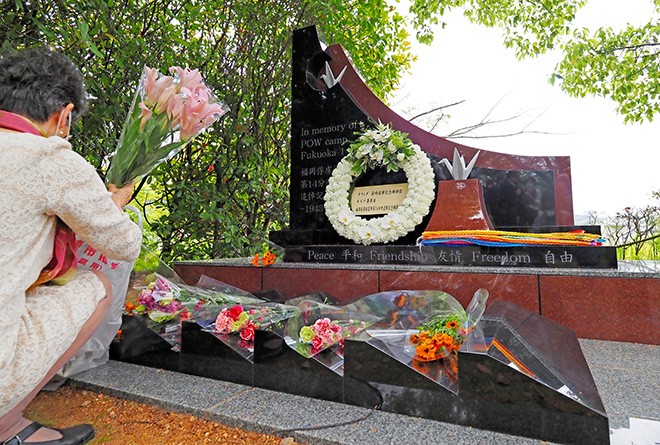 Flowers and origami cranes are offered May 4 at the newly completed cenotaph in Nagasaki for prisoners of war who died in the city's 1945 atomic bombing. (Shoma Fujiwaki)

NAGASAKI--A cenotaph featuring flying cranes, a symbol of peace, was unveiled here May 4 in memory of prisoners of war who perished in the city’s atomic bombing.

About 200 prisoners, mostly British and Dutch, were being held at the Fukuoka POW Camp No. 14 Branch just 1.7 kilometers from ground zero.

Eight POWs are believed to have died that day, Aug. 9, 1945, and many more were injured.

The camp was established on the site of a Mitsubishi Heavy Industries’ shipbuilding yard factory not far from Nagasaki train station in 1943.

Some prisoners died of illness and other causes during their incarceration at the camp.

Rob Schouten, whose father Everhard was detained there, came up with the idea of erecting a cenotaph after he visited Nagasaki for the first time in 2015.

Schouten, 62, said his father was born in what was then the Dutch East Indies, now Indonesia, captured by the invading Imperial Japanese Army in 1943 and sent to Nagasaki.

On the day of the bombing, Schouten’s father was among a group of laborers tasked with building a tunnel 1.8-km away.

Everhard, who died at age 90, often told his son about the badly burned bodies he saw and people fleeing from what he described as a “living hell.”

In 2015, Schouten received notification from the Nagasaki city government that his father had been officially designated as a hibakusha survivor of the atomic bombing.

That prompted the visit to Nagasaki.

But when Schouten arrived at the site of the former camp, the only evidence it had once existed lay in a guideboard posted there.

After the visit, he began contacting family members of the former POWs to raise funds to build a cenotaph.

Masao Tomonaga, the 77-year-old honorary director of the Japanese Red Cross Nagasaki Genbaku Hospital and a hibakusha himself, helped Schouten’s efforts by establishing a six-member committee to smooth the way.

Since the site of the camp was earmarked for redevelopment, the group decided to erect the cenotaph near the Nagasaki Atomic Bomb Museum close to ground zero.

The completed structure, along with flying cranes, has the words “peace, friendship and freedom” inscribed.

It is the second cenotaph to be built in Nagasaki to commemorate former POWs. The first one was put up in 2015 on the former site of the camp’s No. 2 branch in the city’s Koyagi island.

Schouten was unable to attend the May 4 unveiling ceremony due to the COVID-19 pandemic.

But during an online interview with The Asahi Shimbun, he expressed his hope that the monument will become a foothold for young people to remember the hardships that people like his father and fellow POWs faced as well as the atomic bombing in building the next era.

Tomonaga and other attendees offered a silent prayer at 11:02 a.m., the time the atomic bomb detonated 76 years ago.

“The project to commemorate POWs who died because of the atomic bombing took many years,” noted Nobuto Hirano, 74, a second-generation hibakusha who was on the committee to build the cenotaph.

“I hope it will be a place where people can continue to tell the history of the atomic bombing,” he said.