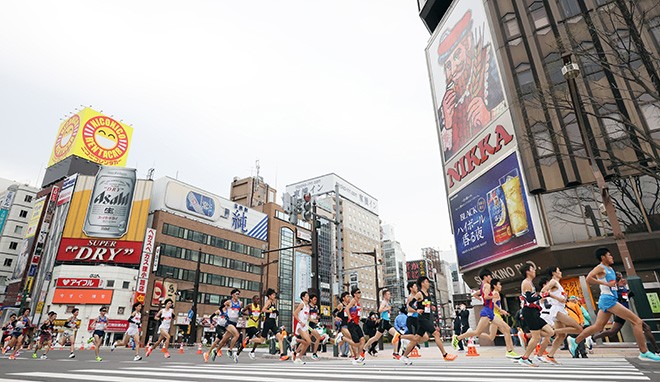 Runners for a pre-Olympic test event race through a street in Sapporo’s nightlife district of Susukino on May 5. (Hikaru Uchida)

SAPPORO—Residents here were told to stay home while others were urged to stay away from the city.

But such precautions against the resurgent spread of the novel coronavirus in Sapporo did not deter Tokyo Olympic organizers from holding a rehearsal event that brought more than 2,000 people to the central streets of the city on May 5.

The Hokkaido-Sapporo Marathon Festival 2021 was held amid heavy security, as well as stricter anti-virus measures, at least for residents and businesses in the Hokkaido capital.

The goal of the event was to test security, traffic control and other measures in preparation for the actual Olympic marathons in August.

In a half-marathon, 72 runners, including four Japanese national team members, raced through the streets of Sapporo on the Olympic course.

Six of the runners came from overseas countries--the Netherlands, Kenya, Malaysia and Germany, according to the festival organizer.

The race started at 9:50 a.m. at Sapporo Odori Park in downtown Sapporo.

The runners twice circled the park and then dashed along the route that passes Sapporo’s famous nightlife district of Susukino and the campus of Hokkaido University.

Sapporo Mayor Katsuhiro Akimoto had earlier called on residents to watch the event on TV at home to prevent a further spread of infections.

Even the event organizer asked people to refrain from watching the race along the route.

Still, around 2,700 people were mobilized to operate the festival, judge the races and provide security. The organizers dispatched 770 citizen volunteers to enforce anti-virus measures and make sure that spectators who did show up kept a safe distance from each other.

The COVID-19 situation was worsening in the days before the pre-Olympic event was held.

On May 2, 326 new COVID-19 cases were confirmed in Hokkaido, including 246 in Sapporo, both record numbers.

Residents of Sapporo have been told to avoid nonessential outings during the Golden Week holidays. Many events have been canceled, public facilities remain shut down, and bars and restaurants are closing early under the instructions of local governments to contain the virus.

Worried that the increasing number of COVID-19 patients could overwhelm the local health care system, Hokkaido Governor Naomichi Suzuki and Akimoto were expected to ask the central government for pre-emergency “manbo” measures for the city on May 5.

Residents and business owners in the city have fumed over the decision to go ahead with the pre-Olympic event at this stage in the health crisis.

However, Tokyo Olympic organizers basically said the show must go on.

Yasuo Mori, a top official of the Tokyo Organizing Committee of the Olympic and Paralympic Games acknowledged at a May 4 news conference that the virus situation “remains very serious.”

“But the operations of the marathons and road racing have a very wide-ranging impact,” Mori said.

“The circumstances are too special,” he continued. “It is extremely difficult to hold an event safely if we do not hold a test race once and check the course.”

Mori emphasized, “We will take various measures and prepare for the event in a way that makes (people) feel safe as much as possible.”