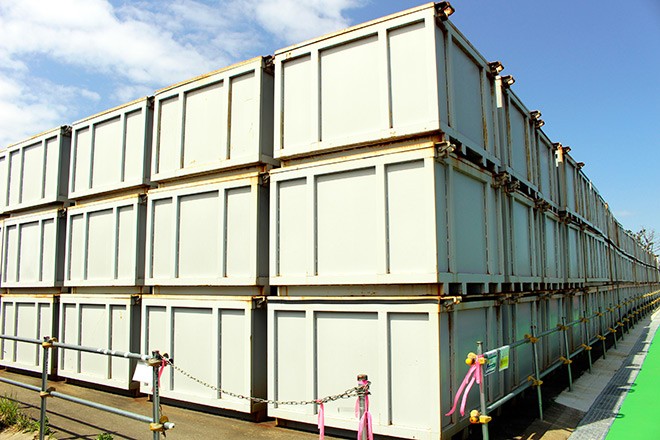 An alarm was triggered after radioactive material apparently leaked from a rusted container storing contaminated waste from the early days of the Fukushima nuclear disaster.

The incident showed that Tokyo Electric Power Co., operator of the crippled Fukushima No. 1 nuclear plant, faces yet another hurdle in work to decommission the power station.

The company has long been grappling with the problem of what to do with more than a million tons of contaminated water stored at the plant.

But it also has tens of thousands of containers of radioactive debris and waste at the site. A decision on the final disposal of their contents has not been made, and now, the containers are showing their age.

In early March, on a day after rainfall, workers at the plant responded to an alarm about rising radiation levels in a drainage ditch.

They identified high-level radioactive materials in the water in the ditch. On the ground nearby, they found a gel-like chunk of sticky and blackish material, 90 centimeters in length and 30 cm in width.

The chunk was emitting radiation.

The workers concluded that rainwater likely became contaminated after coming in contact with the chunk. When the water flowed into the ditch, it set off the alarm.

At the time, workers were moving 270 steel containers to a different location at the plant. One of the containers had become rusty and had a hole at the bottom.

That container held about 450 bags of water-absorbing sheets, hoses and cloths that were used to deal with radioactive water and other problems during the turbulent period after the triple meltdown in March 2011.

Workers had stuffed the waste in the container, which was apparently left as is.

TEPCO said debris from the aftermath of the accident, as well as used protective gear with high doses of radiation and other waste, have been stored indoors at the plant.

The company said items with low doses of radiation have been wrapped in sheets or placed in containers and kept outside.

Currently, there are 85,469 such containers at the site holding low-level radioactive waste. Of them, 4,011 containers were filled before November 2017.

The utility said it checks the condition of the containers and measures the radiation levels once a week.

However, the company did not detect the corrosion of the container until after the alarm went off in March.

TEPCO said it will thoroughly check the condition of the containers as well as the contents in the following six months.

“We will make a judgment based on the degree of rust and consider maintenance and repair as well as refilling when the rust is significant,” a TEPCO representative said.

The company also said it will move all outdoor containers to a new dedicated facility by fiscal 2028.

For the accumulated water stored at the plant, TEPCO plans to treat it and release it into the ocean.

For the debris in the containers, the company plans to decrease the amount to about a third by burning, shredding and reuse. But it has not decided on a final disposal method.

TEPCO estimates that work to decommission the nuclear plant will produce about 780,000 cubic meters of contaminated waste, such as debris and used protective gear, before the end of March 2032.