Goro Miyazaki’s ‘Earwig and the Witch’ praised by his father, Hayao 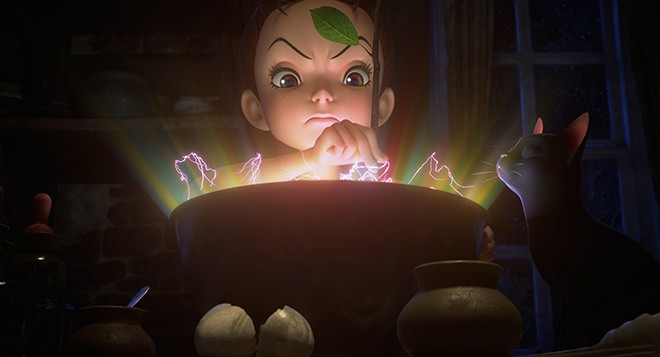 A scene from “Earwig and the Witch” (Provided by Toho Co.)

The release of Studio Ghibli Inc.’s “Earwig and the Witch” has been full of surprises.

It marked the first time the renowned anime house has made a fully computer-generated feature film, and Japan Broadcasting Corp. (NHK) aired it late last year ahead of its theatrical debut.

But most surprising of all, it was the first work by Goro Miyazaki to win a rare, rave review from his father and world-famous director, Hayao Miyazaki, who had been critical of his previous films but entrusted him with the project.

Hayao had criticized his son for jumping into the anime industry to work as a director without previous experience. But he said his son’s latest work was fun and that he wanted to offer unconditional praise for his achievement.

It is uncharacteristic of Hayao to rave about anyone’s work, regardless of the creator.

“I think that’s because he’s grown old,” Goro said. “After it aired on TV, I heard that some elders said they enjoyed seeing the child full of energy throughout the story. My (ex-animator) mother, who is as outspoken as my father, also praised my work for the first time.”

The comedy centers around Earwig, a strong-minded girl who is sent from an orphanage to live with a mean witch.

It is based on a book of the same name by Diana Wynne Jones, whose “Howl's Moving Castle” was also adapted into an animated feature film by Ghibli.

“I found it interesting because Earwig is not a ‘good girl,’” Goro said, recalling how he felt when he read the original novel. “She doesn’t want to be controlled by adults, and instead she controls them and tries to earn her own place.”

It is Goro’s first Ghibli film since “From Up on Poppy Hill,” released in 2011.

Goro set up an international team for the project, comprised of creators from Indonesia, Taiwan, France and Japan, with Malaysian animator Tan Se Lee, who worked with Goro on “Ronja, the Robber’s Daughter,” playing the central role.

He opted for computer-generated imagery following “Ronja,” which he worked on independently. The film aired on television between 2014 and 2015.

“CGI doesn’t require as many geniuses as hand-drawn animation,” he said. “I feel it fits for ordinary people like us to work diligently.”