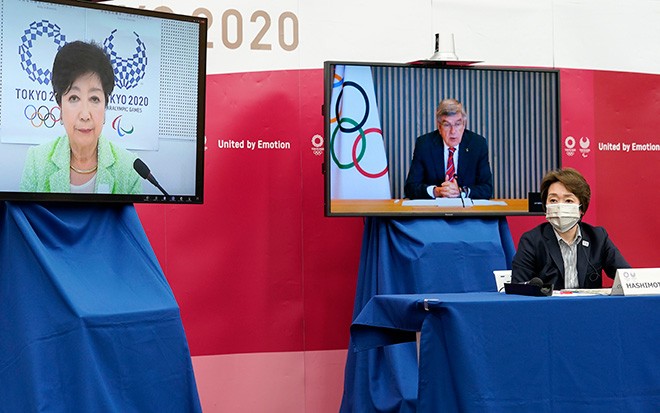 The verb nudge means to elbow someone gently to coax the person into modifying their behavior, rather than by ordering or threatening the person with a fine.

For example, when urging people to evacuate during a disaster, you tell them, "If you go to the evacuation center now, you'll be able to secure your sleeping space."

Even when people know they'd better evacuate immediately, they sometimes put it off. Hence the need to give them the shove by stressing the "now."

Another effective line to use in that situation would be, "Almost everyone has evacuated already," according to economist Fumio Otake, the author of "Keizai Kodogaku no Tsukaikata" (Uses of behavioral economics).

Amid the pandemic, stores have footprint decals in front of checkout counters, and that must be their way of "nudging" customers into practicing social distancing to prevent the spread of the virus.

And when the central and Tokyo metropolitan governments called for reduced commuter train services, their purpose must have been to urge people to work from home.

But the plan completely backfired.

Yesterday was the first workday after the holiday-studded Golden Week, and commuter trains and stations teemed with dense masses of humanity, forcing East Japan Railway Co. (JR East) to revert immediately to the regular service schedule.

And speaking of unintended screw-ups, Tokyo's attempts to keep people off its streets during the holiday week resulted in hordes of Tokyoites spilling into neighboring prefectures.

The difficulty of getting people to modify their behavior is proving increasingly obvious, and the current COVID-19 state of emergency is being extended. The central and local governments need to work even harder.

But ultimately, the question boils down to what we, the people, really want.

I don't believe there is anyone who accepts a society that can't save lives that don't need to be lost.

So long as the government insists on holding the Tokyo Olympics this summer while urging everyone to act with great caution, I must say the government itself is being the biggest quitter.

Isn't deciding to forgo the Olympics the necessary condition for behavioral modification now?