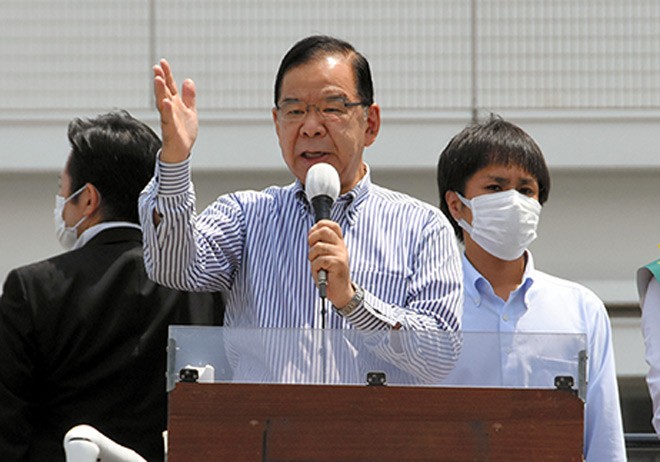 Kazuo Shii, the head of the Japanese Communist Party, campaigns in Saitama city on July 9, the day before the Upper House election. (Tsubasa Yokoyama)

The Japanese Communist Party marked the centennial of its founding on July 15. It is the only Japanese political party that has continued to exist from the prewar era, but it is drifting toward political irrelevance. The party needs to undertake some drastic reforms to reverse this trend if it is to carve out a viable future for itself. In short, it needs to become an open party

The JCP was founded in 1922 as the Japanese branch of the Comintern (Communist International), a Soviet-controlled association of national communist parties formed in 1919. Outlawed under the prewar security law, the party was subjected to harsh oppression before and during World War II.

The JCP made a fresh start as Japan became a democracy after the war and gradually established itself as a solidly independent political organization that maintained a distance from the Soviet Union and China. The JCP switched from advocating armed revolution to build a communist regime to seeking a peaceful revolution by winning a majority of seats in the Diet to govern the nation.

After the collapse of the Soviet Union that brought the Cold War to an end, many communist parties in Europe transformed into social democratic movements. The JCP, however, has maintained its communist identity.

During the 1960s and 1970s, the JCP worked with the now-defunct Japan Socialist Party (JSP) to help reformist candidates get elected as local government chiefs in Tokyo, Kanagawa and Kyoto prefectures.

Even after the collapse of the so-called 1955 system, a political situation in which the dominant Liberal Democratic Party confronted the main opposition JSP, the JCP managed to maintain its political viability by acting as a force supported by voters critical of the LDP government. The JCP expanded its strength in the Diet in some national elections.

But the JCP’s unique governance system known as “democratic centralism,” which tends to keep dissenting voices and minority opinions from being heard by outsiders, inevitably makes it a closed organization. Even though the party has gradually moved toward a realistic and pragmatic policy by revising its platform, the JCP has long struggled to build effective and cooperative relations with other opposition parties because of sharp differences in basic policies concerning the emperor system, the Self-Defense Forces and Japan’s security alliance with the United States.

This basic factor behind the JCP’s failure to expand its political power and support base has remained unchanged.

A broad opposition alliance including the JCP created in response to the administration of former Prime Minister Shinzo Abe’s move to forcefully enact new national security legislation proved beneficial in the Upper House elections in 2016 and 2019. But the arrangement failed to work in the Lower House election last autumn, causing a decline in the JCP’s seats won through the proportional representation system from 11 to nine. The JCP also suffered a loss of two seats from five to three in the July 10 Upper House poll.

Globally, young people are increasingly embracing progressive, leftist views concerning such issues as the climate crisis, widening economic inequality and gender gaps, a trend called “Generation Left.” To appeal to this young generation, which places great importance on diversity, the JCP needs to make a clear departure from its doctrine of infallibility and its closed nature.

Former JCP Chairman Kenji Miyamoto, who defined the party’s basic policies in the postwar era, served as the supreme leader of the party for nearly four decades until he retired from the front line of politics in 1997. The JCP’s current leader, Kazuo Shii, succeeded Tetsuzo Fuwa as chairman more than 20 years ago.

As a key step for reform to open itself up, the JCP should adopt a system to elect its leader from multiple candidates through a vote by party members, just as many other political parties do.