EDITORIAL: Building a broad consensus a must in Diet debate on Constitution 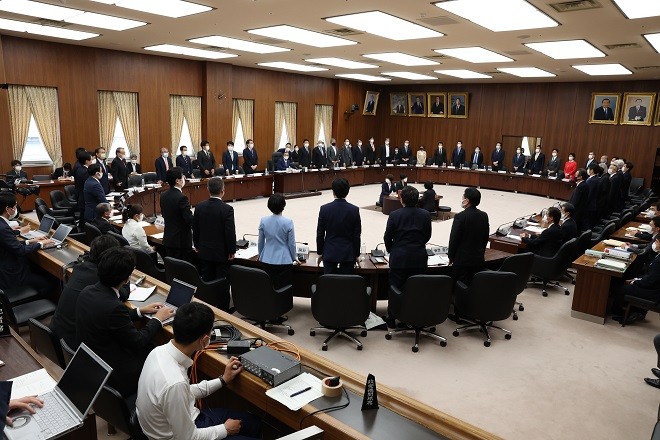 Members of the Lower House Commission on the Constitution vote to pass a bill to amend the national referendum law during a session on May 6. (The Asahi Shimbun)

The Lower House Commission on the Constitution passed a bill on May 6 to revise the national referendum law to set detailed rules for a referendum on a constitutional amendment.

The passage came three years after the measure was submitted to the Diet by the ruling Liberal Democratic Party and its junior coalition partner, Komeito.

The bill was approved by the commission with the support of the main opposition Constitutional Democratic Party of Japan and the Democratic Party for the People as well as the ruling coalition. The proposal is now set to pass the Diet during the current regular session.

Debate on the bill was hampered for so long by the opposition parties’ deep distrust of former Prime Minister Shinzo Abe, who tried forcefully to fulfill his long-standing ambition to rewrite the post-war Constitution.

The political compromise that opened the door to the bipartisan deal on the bill should set the tone for future Diet debate on the Constitution. Any attempt to amend the Constitution requires serious efforts to build a broad consensus through careful and nuanced debate.

The bill is designed to adopt for national referendums the measures for greater convenience for voters that were introduced for national elections after the enactment of the referendum law in 2007.

The measures include establishing common voting places--those that are not designated for a specific area and can be used by any voter in a town or city, in commercial facilities and train stations.

There should be no opposition to the bill. But some opposition parties were concerned that the revision to the law could be used by the Abe administration to set the stage for the Diet’s move to initiate an amendment to the Constitution.

The opposition concern was understandable given Abe’s tendency to forge ahead with his policy initiatives by taking advantage of the ruling coalition’s overwhelming majority in both houses.

The ruling coalition paid little attention to the opposition's proposed revisions to the bill, including additional provisions that would regulate TV and radio ads related to a national referendum to ensure fairness in political campaigns for or against constitutional amendments.

The opposition parties introduced their own bill to revise the law. The opposition proposal should have been considered meticulously along with the ruling coalition bill.

The CDP decided to vote for the bill because the LDP has accepted the opposition party’s proposed revisions to add a clause stating that necessary legislative measures should be taken within three years after the revised law takes effect.

This clause concerns regulations on TV and radio ads, paid online ads, campaign funding and other practices in voting procedures.

Under the current law, TV and radio ads calling for “yes” or “no” votes in a referendum on a constitutional amendment are banned during the two weeks leading up to the voting day. But there is a loophole in this rule that allows ads in which individuals appear to say “I am for (against)” the proposed amendment as their personal opinions.

There is no restriction to ads before the two-week period. Critics point out that the current law could work in favor of political forces with greater financial resources.

Another key issue is how to ensure proper use of the Internet, which has gained huge political influence since the law was enacted, for campaigns concerning constitutional amendments.

It is important for the Diet to make serious efforts to create a public space for fair and meaningful debate on constitutional amendments while giving careful consideration to freedom of speech and expression so that the people, as the holder of sovereign power, can make appropriate decisions.

The ruling and opposition parties should start serious debate on necessary legislative measures according to the additional clause.

If he becomes overzealous in his political efforts to promote constitutional amendments and is willing to take advantage of the ruling coalition’s massive majority, however, there can be no staid, cool-headed debate on the issue.

The Commissions on the Constitution of both houses have a long and proud tradition of nonpartisan, consensus-oriented discussions. Suga would be better off not copying Abe’s high-handed approach to pushing through a policy agenda.