Study: Damage to lungs can linger after COVID-19 is treated 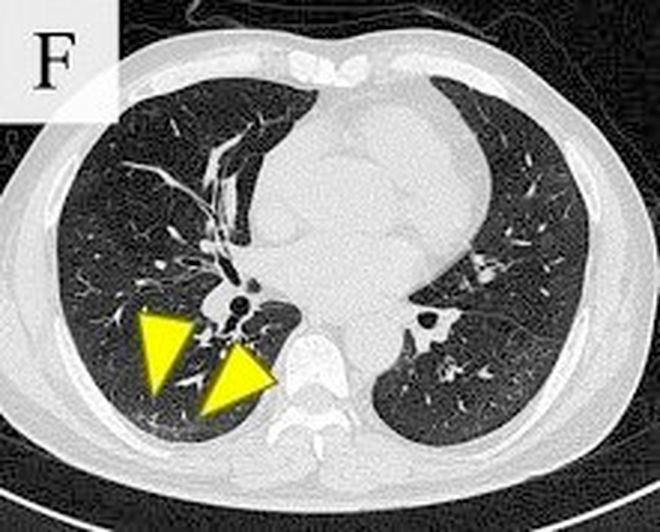 A lung CT scan image of a male patient who has been hospitalized for 16 weeks. The yellow arrow points to where a small shadow is seen, but the pneumonia has almost disappeared. (Provided by Toho University)

Even after patients recover from COVID-19, damage to their lungs can linger for months after they have been released from the hospital, according to a recent study.

A group of researchers at Toho University studied the lung tissue of a man in his 60s who contracted the novel coronavirus in spring 2020.

The man developed a high fever and breathing difficulties and was admitted to the university’s Omori Medical Center.

A lung CT scan showed the patient suffered from pneumonia. Incidentally, the man was also diagnosed with lung cancer.

The man was treated with oxygen administration and medications. After four weeks, he took a polymerase chain reaction (PCR) test and tested negative for the coronavirus twice.

A CT scan taken before he was released from the hospital showed the pneumonia had almost disappeared. He noticed no symptoms.

Three months later, he underwent surgery for lung cancer at the medical center. Doctors removed the lower part of his right lung.

Takashi Sakai, a respiratory surgeon and assistant professor at the university, studied the removed lung tissue section. The surgeon did not detect the novel coronavirus, but the part where pneumonia was previously detected still showed damage, such as fibrotic tissues and blood clots.

In other parts where pneumonia was not detected before, such symptoms were not found.

The study results were published in a medical journal in April.

Akira Iyoda, a professor at the university who is part of the research group, said fibrosing can occur due to other factors such as chronic pneumonia and smoking.

But the blood clots detected in the man’s lung were pathognomonic, he said. Also, fibrosing was observed in the portion where the strong presence of pneumonia was detected.

“On the whole, they were the effects of the pneumonia caused by COVID-19,” Iyoda said.

It is not known if such changes have occurred in other patients and if they are related to permanent damage from COVID-19.

If lung tissues become further fibrotic, patients will have hard time taking in oxygen and suffer from shortness of breath.

“Microlevel fibrosing and blood clots, which were not detected by a CT scan but were confirmed in this study, are possibly related to permanent damage,” Iyoda said.

A group of researchers at the National Center for Global Health and Medicine conducted a follow-up study on 63 COVID-19 patients.