Virus experts: Golden Week likely the calm before the storm 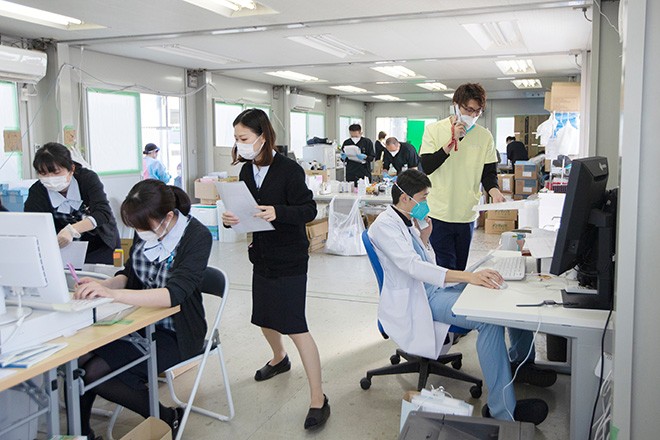 A prefabricated testing center for the novel coronavirus in Miyoshi, Saitama Prefecture, on Dec. 28, when new cases were surging (Asahi Shimbun file photo)

Health officials are warning against false assurances from the lower infection numbers reported during the Golden Week holidays, saying signs actually point to a more dire COVID-19 situation in the coming weeks.

“New cases appear to be ebbing now but that is because fewer people got themselves tested for the virus during the Golden Week holidays,” health minister Norihisa Tamura told a meeting of an expert panel advising the ministry on the pandemic on May 6.

The national daily average of new COVID-19 cases for the week between April 22 and April 28 was 4,923. The comparable figure was 4,886 per day between April 29 and May 5, when the holiday period ended.

The daily average number of diagnostic tests conducted nationwide for the virus was 64,457 in April. The figure decreased by about 30 percent to 44,118 from May 1 to May 4.

Tokyo reported 591 new infections on May 6, a relatively low tally for a Thursday.

Sharing Tamura’s view, metropolitan health officials cautioned against taking the figure as a sign of a declining trajectory during the third state of emergency in the capital.

They said the May 6 number largely reflected the fact that fewer tests were conducted because many hospitals were closed during the holidays. They also cited a delay in reports on new cases confirmed from public health centers during Golden Week.

The officials said other numbers indicate that new infections will start rising again.

More Tokyo residents are contacting consultation centers about fevers, a common symptom of COVID-19. And the rate of positive tests has also been increasing.

The health officials said the situation now is similar to what occurred late last year before the third wave of infections hit the capital.

The number of people who contacted consultation centers ranged from 756 to 1,170 a day in late March after the second state of emergency was lifted for Tokyo.

The rate of patients who tested positive for the novel coronavirus was 9.2 percent in the week through May 4, 3 percentage points higher than a week earlier.

N501Y, a COVID-19 variant that is believed to be 30 to 90 percent more contagious than the initial strain, is fast circulating in Tokyo.

An estimated 67.9 percent of patients in Tokyo who tested positive in the most recent week were infected with the variant.

“We need to thoroughly implement anti-coronavirus measures to stem the spread of the highly infectious variants,” Tokyo Governor Yuriko Koike said at a meeting of health experts on May 6.

Central government officials said they were worried that the variants are spreading in local regions, not just in urban centers, such as Tokyo and Osaka.

The numbers, each 10 cases higher than in the previous week, put those prefectures in the most serious of the nation’s four-stage levels--25 per 100,000 people--in this category.

(This article was compiled from reports by Jun Tabuse, Hiroshi Ishizuka and Yoshitaka Unezawa.)