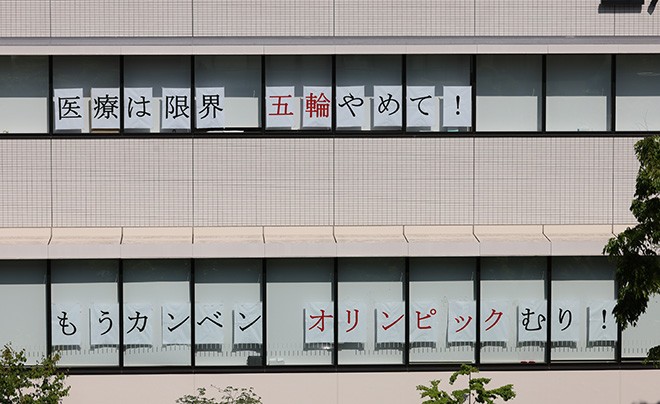 Messages posted on the windows of Tachikawa Sogo Hospital read, “Medical capacity reached its limits. Stop the Olympics!” The photo was taken in Tokyo’s Tachikawa on May 6. (Tatsuya Shimada)

For Masaya Takahashi, whose hospital is under strain from COVID-19 patients, the last straw came when he heard the government was calling for doctors and nurses to volunteer for the Tokyo Olympics and Paralympics.

So, the head of Tachikawa Sogo Hospital, in Tokyo’s Tachikawa, posted messages on his windows, saying enough is enough.

“Medical capacity has reached its limits. Stop the Olympics!” one sign says. Another pleads, “Give us a break. The Olympics are impossible!”

The hospital, which has been accepting COVID-19 patients, decided to publicly express its concerns that the Tokyo Olympics and Paralympics might spread infections further while medical capacity is overstretched due to surging cases.

When The Asahi Shimbun asked Takahashi for an interview, he replied in writing.

He said that, “he needed to send some messages as the hospital head” and posted the signs on the windows on April 30.

“It pains me to do this whenever I think of athletes making unimaginable efforts and Olympic staff working hard to hold it,” Takahashi said.

However, he pointed out as the Olympics could cause the virus to spread further, “I have no choice but to oppose it.”

According to Takahashi, the hospital, which has 287 beds and 90 doctors, has been accepting COVID-19 patients since April 2020. It changed one of its five general wards into a dedicated ward.

The 47 beds of the former general ward were reduced to 26.

A total of three beds in the intensive care unit (ICU) and high care unit (HCU) had been used for treating COVID-19 patients in serious condition.

However, due to a massive “fourth wave,” the hospital decided to use all 16 beds in the HCU for COVID-19 patients on May 7.

But to do that, the hospital needed to place patients who underwent surgeries and were supposed to stay at HCUs in general wards along with patients with dementia and other illnesses.

“The burden of nurses to avoid risks will exceed their limits,” Takahashi said.

The rate of accepting requests from ambulances to accept their patients dropped from 80 percent between January and March in 2020 to 55 percent for the same period in 2021.

While no one knows when the coronavirus pandemic will be contained, there are few nurses who want to join the hospital staff.

“Each ward has only the minimum staff, so if someone quits their job due to fatigue, the domino effect could cause a collapse of the entire medical system,” Takahashi said.

After the messages were posted on the hospital windows, photos of them spread over social media. Takahashi said that the hospital has been receiving phone calls and emails of encouragement and support.