6 prefectures listed for state of emergency until May 31 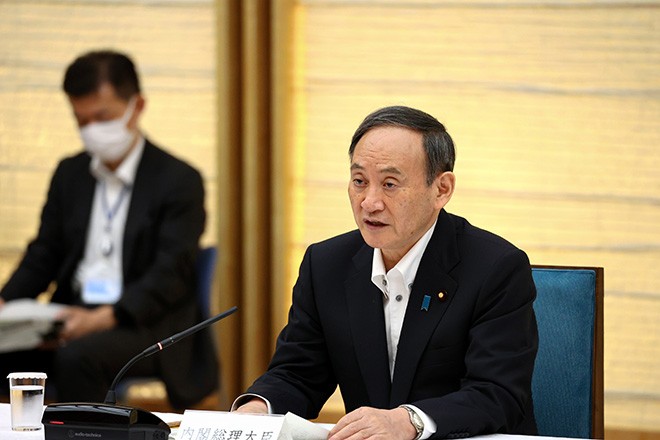 Prime Minister Yoshihide Suga speaks at a May 7 government task force meeting where the decision was made to extend the COVID-19 state of emergency until May 31. (Koichi Ueda)

Two more prefectures will be placed under the COVID-19 state of emergency that has been extended until May 31, a sign that novel coronavirus infections have spread to wider parts of the nation.

Prime Minister Yoshihide Suga on May 7 extended the state of emergency after receiving requests from Tokyo, Osaka, Hyogo and Kyoto prefectures to keep it in place beyond the scheduled May 11 deadline.

Suga also told a government task force meeting to deal with the pandemic that Aichi and Fukuoka prefectures would be covered by the state of emergency from May 12 to 31.

“We will thoroughly implement measures that we feel will be highly effective as the nation returns to a normal calendar after the Golden Week of national holidays,” Suga said.

He added that the effects from measures already in place could be seen in the major reduction of the flow of people in Tokyo and Osaka. But he explained that the state of emergency had to be extended because of the high numbers of new cases in the major urban centers and the strained medical care situation in Osaka and Hyogo prefectures.

Businesses that serve alcohol in the six prefectures will be asked to close operations for the duration of the state of emergency. However, the previous closure request to commercial outlets with a floor space of 1,000 square meters or more will be eased. Those establishments will be allowed to stay open until 8 p.m.

Measures concerning crowd capacity for sporting and other events will also be relaxed. Venues in the four prefectures covered by the state of emergency have held such events without spectators in the stands.

The eased rules will allow a 50-percent capacity of the venues, but only up to 5,000 people.

Governors facing still high numbers of new cases, such as in Tokyo and Osaka, will be given more flexibility on the measures, such as whether to continue asking large commercial outlets to shut operations and ban all spectators.

The government task force also approved implementing pre-emergency measures to three new prefectures—Hokkaido, Gifu and Mie—from May 9 and extending such measures in the five prefectures of Kanagawa, Saitama, Chiba, Ehime and Okinawa until May 31.

But Miyagi Prefecture will be removed from coverage of the pre-emergency measures as of May 11.