Tokyo, Osaka to maintain tight rein on people going out 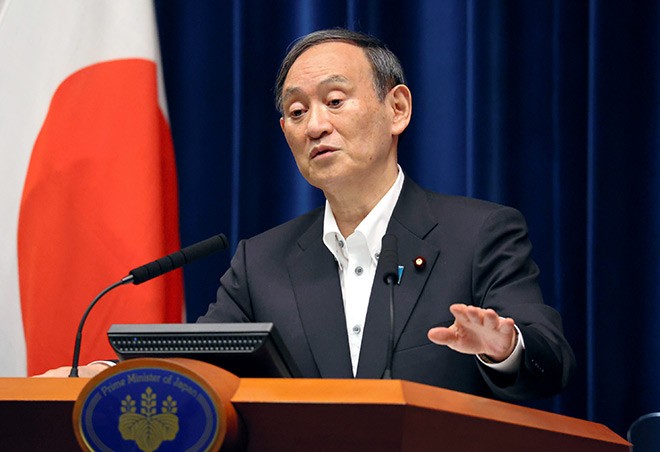 Prime Minister Yoshihide Suga responds to questions from reporters at a May 7 news conference in which he explained his decision to extend the COVID-19 state of emergency until the end of May. (Koichi Ueda)

Local authorities in Tokyo and Osaka announced they will continue to strictly enforce measures to combat the COVID-19 pandemic as the central government extended its state of emergency until the end of the month but with some easing of curbs.

Within hours of Prime Minister Yoshihide Suga's May 7 announcement that the state of emergency would be extended until May 31 for Tokyo, Osaka, Hyogo and Kyoto prefectures and applied to Aichi and Fukuoka as well, officials in Tokyo and Osaka said they will continue their requests to local businesses to remain closed during the period.

The central government had included a number of relaxations of requests, but the continued high COVID-19 case numbers in Tokyo and Osaka led officials there to stick with the stricter measures.

While Suga tried to tout the effectiveness of past steps in reducing the flow of people in public spaces, he was forced to acknowledge that Tokyo, Osaka, Aichi and Fukuoka prefectures were at the most serious stage 4 in guidelines to determine the spread of infections in each jurisdiction.

He cited that as his primary reason for extending the emergency.

The central government said May 7 that commercial establishments with floor space of 1,000 square meters or greater could remain open until 8 p.m.

However, Tokyo metropolitan government officials said they would continue to ask venues in that category to remain closed.

Osaka prefectural authorities also decided May 7 to continue with the requests to large commercial establishments to remain closed.

Tokyo will also continue with closure requests to movie theaters, department stores, shopping centers, video game centers and gymnasiums. It will also seek the cooperation of such businesses even if they have floor space under 1,000 square meters.

One relaxation measure proposed by the central government that the Tokyo metropolitan government will go along with concerns sporting and other events. Sporting events in the capital had been held without fans in the stands, but from May 12 will be allowed to be filled to up to 50 percent capacity so long as the maximum number of fans does not exceed 5,000. Event organizers will also be asked to end the events by 9 p.m.

Faced with a much tighter situation in its medical care structure, Osaka Governor Hirofumi Yoshimura said May 7 that requests to hold sporting events without fans in the stands will be continued.

Yoshimura told reporters it was not appropriate to relax such steps given the high number of new COVID-19 cases that has filled hospital beds for those with serious symptoms to close to capacity.

The other four prefectures to be covered by the extended state of emergency will also generally go along with the measures proposed by the central government.

The Hyogo and Kyoto prefectural governments will ask large commercial establishments to close at 7 p.m. on weekdays and remain closed throughout the day on weekends.

The central government guidelines for events will be followed.

The Aichi and Fukuoka prefectural governments will ask large commercial establishments to close at 8 p.m.