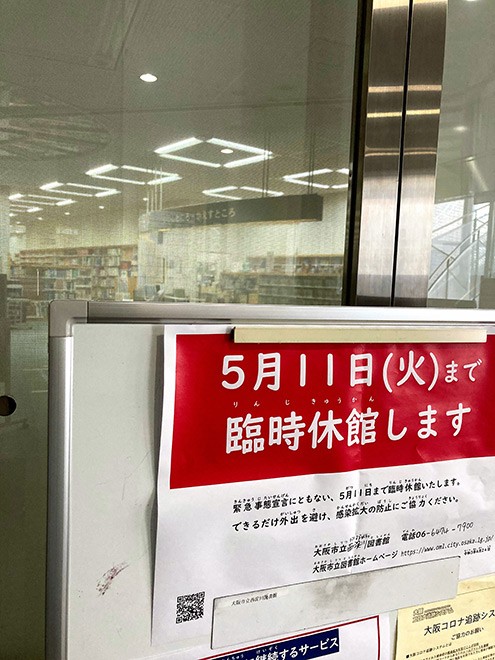 An Osaka municipal library branch posts a sign saying it will be closed until May 11. (Yuya Tanaka)

Forty-one patients died the same day from COVID-19, bringing total fatalities in the prefecture to 1,696.

The accumulative total of COVID-19 cases in Osaka now stands at 88,737.

About the only bright news for Osaka was that the daily figure in the prefecture fell below that of Tokyo, which reported 1,121 cases on May 8. The last time Tokyo had a higher daily figure was March 29.

Six patients in Hyogo died the same day, bringing total fatalities there to 770.

On the main northern island of Hokkaido, where quasi-emergency measures will be implemented from May 9, local authorities reported a record 403 cases on May 8. Hokkaido’s capital Sapporo also confirmed a record 277 cases the same day.

Aichi Prefecture in central Japan and Fukuoka Prefecture on the main southern island of Kyushu, which will both come under the state of emergency from May 12, also reported record COVID-19 case numbers on May 8 with 575 and 519, respectively.