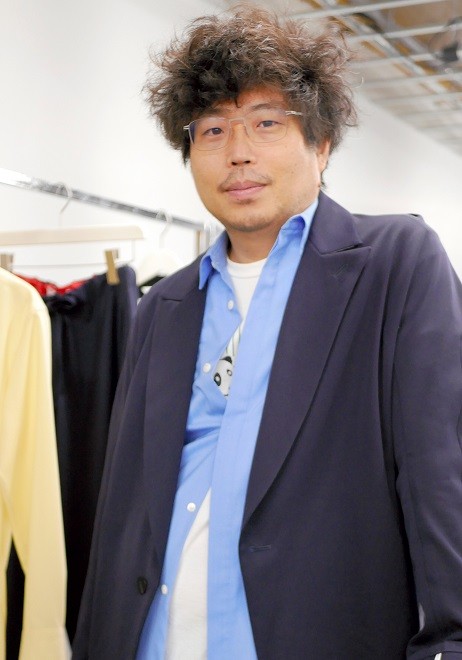 "It is so important to serve customers at a storefront to sell clothes full of emotions," said Ryuhei Oomaru after returning to Japan for his pop-up store. (Yoko Hasegawa)

Fashion designer Ryuhei Oomaru has made it big in New York, even working on a suit for U.S. Vice President Kamala Harris and clothes for former first lady Michelle Obama.

But Oomaru, 43, wouldn't have made it this far in the global fashion scene if it weren't for an instructor of a sewing class in his native Fukuoka.

His sewing box contains a pair of old sewing scissors, a keepsake from Ruriko Sugino, from whom he learned sewing when he was in his teens. Oamaru keeps the scissors in good condition and uses them with care.

With his family operating furniture shop Oomaru Seisakusho, he grew up watching how his artisan grandfather made custom furniture pieces.

He went on to study at a high school, but dropped out after only three months. Oomaru was interested in sewing, and he bought books to start making clothes on his own.

Around that time, he started attending a sewing class for housewives at the recommendation of an acquaintance, who was the manager of a second-hand clothing shop. Hooked on punk music at the time, Oomaru dyed his hair in red and wore a pink-colored military jacket and "jika-tabi" rubber-soled footwear.

He found acceptance in Sugino, who praised his fashion sense.

"She was an old lady who served tea even for delivery people, and she also cooked for me. She would keep me company as I made clothes all night, listening to punk music," he recalled. "She was a source of emotional support when I was rebelling against my parents after quitting school."

Oomaru enrolled at Bunka Fashion College in Tokyo at Sugino's suggestion. He worked as a pattern maker at a famous fashion brand after graduation. Sugino passed away just before he landed the job.

Oomaru went to the United States in 2006, living in a cheap shared apartment at first. As he made clothes in exchange for free English lessons, he gained a reputation for his skills. Two years later, he founded pattern maker Oomaru Seisakusho 2 in New York, making patterns and sewing samples for famous fashion brands.

In a clear departure from competitors, his company handles everything in-house from planning and making paper patterns to sewing, while it is occasionally asked to work with designs too difficult to create for their pattern makers.

Oomaru has worked on patterns for more than 20,000 clothing pieces for a total of 100 brands, while he also played a part in making clothes worn by Obama and Harris.

Establishing his own brand Overcoat in 2015, Oomaru makes unisex clothing with his sophisticated skills as a pattern maker.

Featuring tucks on the shoulders, its coats are tailored to fit various body types.

He is not only a designer but also an artisan who has been making clothes with his own hands.

"I often get asked about sustainability recently, but it's only natural for those who make things not to waste materials," Oomaru said. "It's an important theme and we need to think about it properly, but I don't like the tendency to make money from it."

Meanwhile, he also says it is important, from the standpoint of sustainability, to pass down Japanese techniques to future generations.

All 10 staff members at Oomaru Seisakusho 2 are Japanese, except for the accountant. He founded Oomaru Seisakusho 3 in Tokyo in 2016 as a base to receive orders for Japanese factories to produce clothes sold at stores in Japan by overseas brands.

"Japan should compete with techniques with Europe, not with prices with countries whose labor costs are one digit cheaper," Oomaru said. "I think our generation must properly pass the full worth of Japanese products on to future generations."