Teens turn to online petitions to bring about change to society 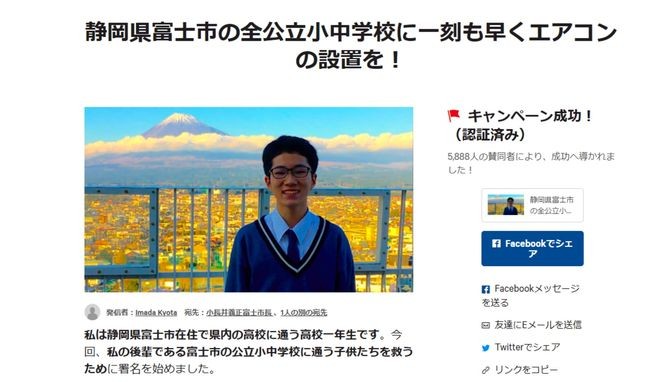 An online campaign to call for the immediate installation of air conditioners at all public elementary and junior high schools in Fuji, Shizuoka Prefecture (From the Change.org website)

When a 16-year-old second-year student at a Kanagawa prefectural high school had a lesson on global warming, she looked around and realized her classroom was part of the problem.

She saw that the room was using electricity and an air conditioner. She was also informed in a school office that the school's electricity was mainly supplied by thermal power generation.

"It's such a contradiction to see the school boosting global warming when it is teaching about it," the girl said. "It doesn't make sense for the school to destroy the future."

In March, she decided to start an online petition after learning that there was a similar effort made by a senior high school student asking confectionery makers to stop excessive packaging.

Her petition drive has collected more than 14,000 signatures. She intends to take them to the prefectural government in the summer to ask officials to take action.

"With the internet, I can reach beyond regions and call on an unimaginable number of people," she added.

The girl is part of an increasing number of teens who are spearheading online petitions to change society, collecting signatures from thousands, or even tens of thousands, of supporters and prompting officials to take action.

Although their themes vary from global warming to a video game bylaw, they are motivated by a shared desire to make a difference.

Youngsters make full use of social media to promote their opinions while they remain anonymous and protect their privacy, experts say.

When Wataru, 18, who asked to be identified only by his first name, read a draft of a video game bylaw set by the Kagawa prefectural assembly that limits video game time for children, he thought: "Games are not the villain. I'll collect signatures if an ordinance like this passes."

He launched a petition drive last year when he was a senior high school student to prevent the ordinance from taking effect.

The draft ordinance stated that children should spend no more than 60 minutes on video games on weekdays and 90 minutes on holidays. He decided to start the petition to collect signatures from across the country as quickly as possible.

Although Wataru submitted 595 signatures to the prefectural assembly, the draft ordinance passed.

Later in September, he filed a lawsuit to seek damages from the prefectural government, claiming that such limitations violate the right to pursue happiness guaranteed by Article 13 of the Constitution.

"Online petitioning was a starting point for me to easily appeal to society even on an anonymous basis," said Wataru.

Kyota Imada, 18, who is a first-year student at Keio University, started a petition drive when he was a first-year senior high school student in 2018.

Imada, who was living in Fuji, Shizuoka Prefecture, was motivated to start the petition after watching grade-schoolers on their way home from school bathed in sweat.

He collected signatures from about 6,000 people asking the city government to immediately install air conditioners at all public elementary and junior high schools in Fuji.

Imada brought the signatures to the mayor, prompting the city government to rectify the situation.

"People in ordinary and vulnerable positions can promote their causes anonymously, and they can win sympathy from so many people so quickly," Imada said. "It can be a means to change society."

Teens mainly use Change.org to promote their petitions. The website was founded in the United States in 2007 before it started its services in Japan in 2012.

According to staff member Mameta Endo, although there are no statistics about the ages of petition starters, an increasing number of them in the past one or two years are apparently teenagers based on their statements.

Last year, when coronavirus infections were continuing to spread, senior high school students and others launched at least 200 campaigns to ask their schools to refrain from reopening in April as scheduled and extend closure periods.

A petition drive spearheaded by two senior high school students to move the start of Japan's school year from April to September attracted support from more than 23,000 people.

"It's a new movement for teenagers to contribute to society. The underlying cause can be attributed to citizenship education and inquiry activities that have become widespread among students who were given the right to vote on their 18th birthday," said Shigeo Kodama, the dean and a professor of education at the University of Tokyo's Faculty of Education.

"Unlike previous movements where members worked as part of political parties or civic groups, students work as individuals and make full use of the internet and social media to champion their causes while protecting their privacy and anonymity."