OLYMPICS/ Gatlin feels 'beyond safe' thanks to COVID protocols 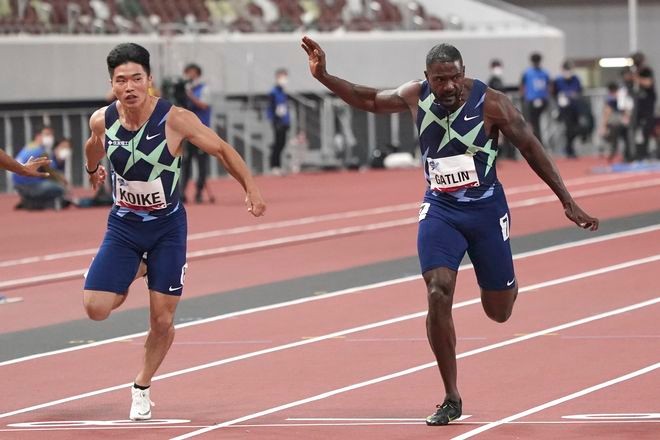 Justin Gatlin, right, of the U.S. competes on way to winning the men's 100 meter race during an athletics test event for Tokyo 2020 Olympics Games at National Stadium in Tokyo on May 9. Yuki Koike, of Japan is at left. (AP Photo)

U.S. sprinter Justin Gatlin said he felt "beyond safe" thanks to the COVID-19 protocols he needed to follow on his visit to Japan to participate in an Olympics test event for athletics.

Gatlin was one of nine international athletes who entered the country to take part in the event on Sunday at Tokyo's Olympic Stadium, in a warm-up for the Games with less than three months to go. Gatlin won the 100 metres at the event.

The 2004 100m Olympic gold medallist said he was tested for the novel coronavirus every day by either saliva or nasal swab and had barely been outside, but the price was worth it in order to compete.

"The bubble has been very successful. The only time I've ever seen the outside is when we get on the bus to go to the track. We work out then we go back to the hotel. We don't even eat in a cafeteria or a meeting ground, we take our food to our room and we eat in our room.

"I know a lot of athletes are not going to be happy with this but the measures are in place to keep everyone safe, I think it's working."

For Gatlin, the bubble means finding ways to unwind in his room.

"I love Netflix and Hulu, so just being able to sit in the room and relax and chill," he said, though he added that he missed going out and being able to eat local foods.

Gatlin, 39, said he recently had another son, and giving him the chance to see his father compete in the Olympics was one thing that was driving him.

"This will be my fourth Olympics and my last Olympics, so it'll be a special place for me," he said.