EDITORIAL: ‘Akagi file’ must not be blackened out if truth is to come out 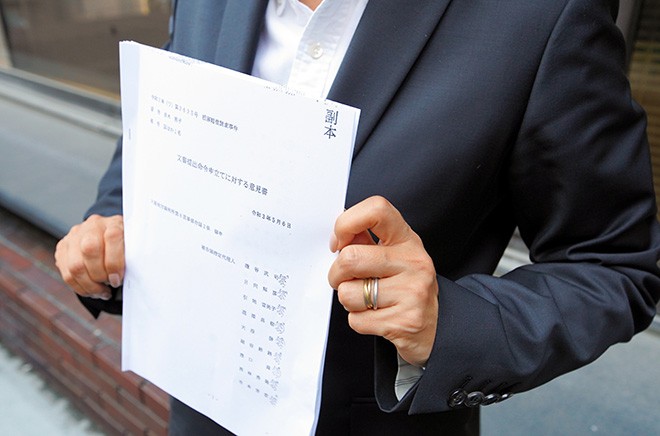 Masako Akagi speaks to reporters in Osaka on May 6 while holding a document she received from the government over the record left by her late husband. (The Asahi Shimbun)

The government has acknowledged the existence of a key document related to the Finance Ministry’s falsification of official documents over the dubious sale of state-owned land to Moritomo Gakuen, a private educational institution.

The “Akagi file,” as the document is known, refers to a record of events kept by Toshio Akagi, an official at the ministry’s Kinki Local Finance Bureau, who committed suicide in 2018 in distress over the role he was ordered to play in the falsifications.

His widow, Masako, called on the government to produce the file during a court case in which she is demanding damages from the government and a former senior Finance Ministry official.

The government, which previously would not even say whether the document existed, has at least changed its insincere stance and agreed to disclose the file.

Be that as it may, the government should not be allowed to blacken out parts of the document to deter facts from being elucidated.

The government’s acknowledgment came too late.

More than a year has passed since Masako took the case to court. Seven months have elapsed since an audio recording of Toshio’s former superior speaking about the existence of the file was submitted to the court.

During all the time since, Finance Ministry officials continued to reject demands for disclosure of the file. In court, they reasoned that the document has nothing to do with the points in dispute. In the Diet, they argued that release of the file would affect the court proceedings.

We cannot but feel anger again at their attitude, which in all likelihood was intended to cover up the truth.

Government officials did say they will disclose the document only after the court urged them to do so.

The Finance Ministry should have serious remorse over its previous reluctance to the disclosure. Finance Minister Taro Aso, the ministry’s top official who repeatedly said no to disclosure requests at the Diet, bears a particularly heavy responsibility.

A key concern is how much of the content of the Akagi file will be brought to light.

Government officials said they will disclose, among other parts, a record of the development concerning the falsifications, kept and organized chronologically by Toshio, and emails exchanged between the Finance Ministry headquarters and its Kinki Local Finance Bureau.

Those materials could not only provide clues to assessing the distress that Toshio suffered but also help reveal the motivation behind the falsifications and details of the chain of command.

Finance Ministry officials plan to disclose the document after having parts of it blackened out.

It is necessary to protect the privacy of third parties who have nothing directly to do with the sale of the state-owned land or the falsification of the documents. The ministry, however, should not be allowed to make arbitrary decisions out of consideration for its organization and its officials.

The ministry should face up to Masako’s plea that the names of those who urged her husband to tamper with the documents should be properly disclosed.

It has been revealed that government officials gave as many as 139 untrue responses to the Diet over the Moritomo scandal.

It has also been learned that the Finance Ministry turned down 46 freedom-of-information requests for records of exchanges between the government and the Moritomo Gakuen side by falsely saying that no such records existed when relevant records actually existed.

The cover-up propensity of the government, and especially of the Finance Ministry, undermines the very foundation of democracy. Not only did they refuse to disclose information that should be shared with the public but they also continued giving false explanations.

The previous administration of former Prime Minister Shinzo Abe assigned the task of investigating the Moritomo scandal to the Finance Ministry, a party to the scandal, and ended the probe by punishing officials involved without fully elucidating what occurred.

The stance has been taken over by the administration of Prime Minister Yoshihide Suga.

The Akagi file, a piece of evidence newly made available, should prompt a thorough probe into the matter by a third party.