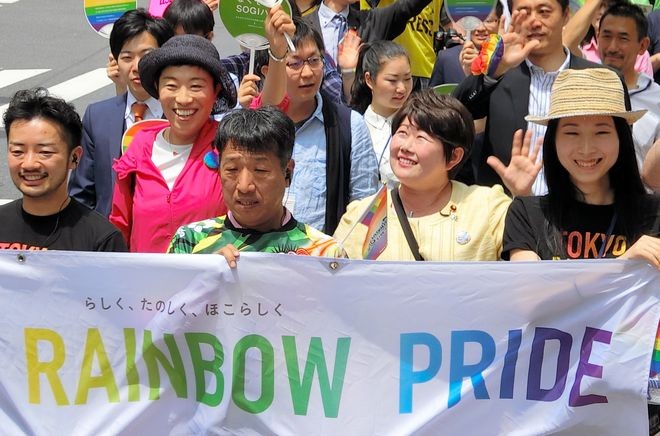 Noriko Miyagawa, a Lower House member of the ruling Liberal Democratic Party who died in 2019, second from right in front, with Kiyomi Tsujimoto, a Lower House member of opposition Minshinto, second from left in pink, marched at the Tokyo Rainbow Parade in May 2017, demanding protection of the rights of sexual minorities. (Asahi Shimbun file photo)

The ruling Liberal Democratic Party accepted a “maximum” compromise on legislation to protect sexual minorities against discrimination, but conservative party members may still block the bill over their aversion to same-sex marriages.

Opposition lawmakers have already submitted a bill to the Diet to eliminate discrimination against LGBT people.

Discussions and negotiations by both the ruling and opposition sides on such legislation are entering the final stretch.

According to multiple sources, an LDP committee on May 7 offered a revision bill with a summary that says “discrimination is unacceptable.”

In its initial revision bill drafted in 2016, the summary said the LDP will “promptly realize lawmaker-initiated legislation that aims to increase an understanding of (LGBT) issues.”

The party has promoted this bill in national election campaigns.

However, the main opposition Constitutional Democratic Party of Japan has demanded that the LDP clarify that the bill’s purpose is to eliminate discrimination and to set rules that ban public offices and businesses from discriminating against sexual minorities.

The LDP quoted part of the opposition’s draft bill to emphasize that the party’s focus on promoting awareness is intended to eliminate discrimination.

The new summary of the bill says, “This stands by the principle that all people are respected as irreplaceable individuals who are equally entitled to basic civil liberties regardless of his or her sexual orientation or gender identification, and it is based on the idea that discrimination because of sexual orientation and gender identity is unacceptable.”

The ruling party had kept a distance from the opposition lawmakers’ draft bill to eliminate discrimination because some LDP members expressed opposition, feeling that banning discrimination “would lead to legalizing same-sex marriages,” sources said.

The current draft bill is the “maximum concession” that the party can make, an LDP representative said.

If negotiations fail, the LDP may submit its initial revision bill to the Diet.

The Olympic Charter pledges to fight against all forms of discrimination, including those based on sexual orientation.

Partly because of that, the LDP committee, headed by a former Defense Minister Tomomi Inada, wants to pass the bill before the Tokyo Games this summer.

NO ACTION IN 5 YEARS

The LDP’s General Council in 2016 accepted a “basic idea” about LGBT issues, saying, “If procedures to ban discrimination are taken under the current circumstances where a necessary understanding is not growing, there is a chance of producing unintended offenders and further pushing (LGBT people) into isolation.”

The LDP’s revision bill has been kept on the shelf for five years because of strong opposition from conservative lawmakers.

Japan currently has no basic law that covers discrimination based on sexual orientation and gender identification.

There is the Special Provisions for Handling Gender for People with Gender Identity Disorder Law, but it mainly concerns changing gender in the family registration system.

The absence of a law that protects LGBT people has contributed to a lack of policies dealing with problems facing sexual minorities.

Lawmakers of the LDP and CDP started negotiations on the legislation in April.

If the lawmakers fail to pass the bill at the current Diet session before the Tokyo Olympics, they will likely lose momentum for the legislation.

LGBT people and their supporters on May 2 issued an emergency statement, questioning whether the LDP’s initial wording about “promoting an understanding” of the issues would actually protect the human rights of sexual minorities.

They expressed concerns that such a bill would let discrimination go unchecked and hamper moves to allow same-sex marriages and similar partnership systems.

The LDP then added, “discrimination is unacceptable,” in the description of the bill’s purpose.

Although negotiations between the ruling and opposition parties over the bill have finally entered the crucial stage, criticism is growing within the LDP over anything that could allow dual surnames for married couples.

“If passage of the bill becomes realistic, the same group will oppose it,” a conservative pundit said.