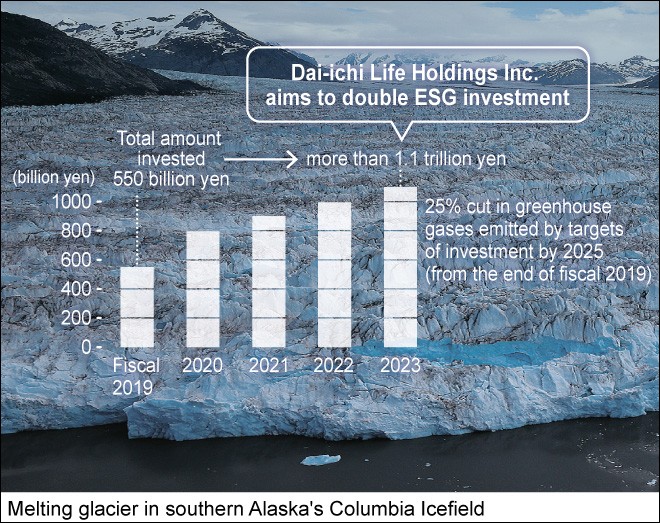 Dai-ichi Life Holdings Inc. plans to cut greenhouse gases emitted by companies it holds shares and bonds in by 25 percent by 2025 from the level recorded at the end of fiscal 2019, the insurer told The Asahi Shimbun.

It is rare for a leading life insurance company to set a short-term numerical target for measures against global warming in its asset management plan.

“It’s meaningless for businesses to operate on the planet if it becomes uninhabitable due to extreme weather,” Dai-ichi Life Holdings President Seiji Inagaki said in an interview with The Asahi Shimbun. “Life insurance companies can’t survive in such an environment, either.”

The latest move by the major Japanese institutional investor will likely spur other domestic firms to further step up their efforts to combat global warming.

Dai-ichi Life Holdings plans to spend more than 300 billion yen ($2.76 billion) in environmental, social and governance (ESG) investment over the next three years, bringing the total amount of the investment to more than 1.1 trillion yen, or twice the figure it had invested by the end of fiscal 2019.

Inagaki said his company will urge firms it invests in to take action to tackle global warming through dialogue. He added that the company may sell off its shares and bonds of those that are extremely slow in making such efforts.

Dai-ichi Life Insurance Co., a group company of Dai-ichi Life Holdings, has been hit by a series of scandals where its sales staff members swindled customers out of money.

In response to the matter, Inagaki said he wants to review the pay system for new salespersons in the next fiscal year.

He also indicated that the company will reduce its performance-based portions of salaries of sales staff members that fluctuate depending mainly on the number of contracts they obtain.