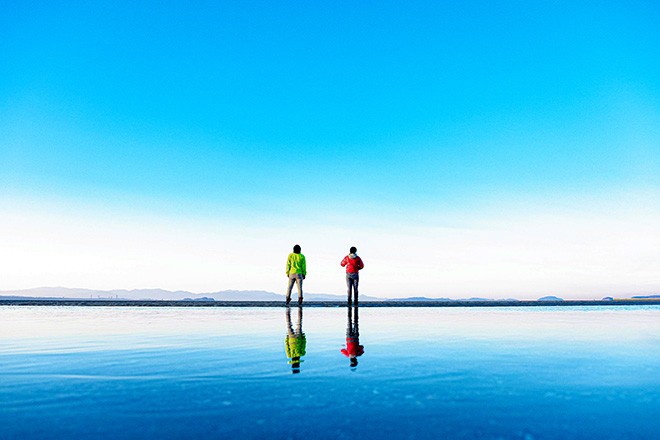 Though the "sea mirror" appears mostly in the evening, it sometimes is visible during the day. (Provided by the Fukutsu Tourist Association)

FUKUTSU, Fukuoka Prefecture--This coastal city is trying to woo tourists in Japan and beyond by pitching its version of Bolivia's world-famous Uyuni Salt Flats.

Fukutsu’s “sea mirror” appears in the shallow water off a 3-kilometer sandy stretch between the beaches of Fukuma and Tsuyazaki.

If there is little wind and the timing is right, the sky is reflected in the shallow water like a mirror.

The fantastic vista appears for 30 minutes to an hour before low tide.

This city, with a population of 66,000, already boasts a well-known tourist spot: the light of the setting sun directly hitting the approach of Miyajidake shrine from the sea, which was featured in a TV commercial.

The reflecting sea, which evokes the image of the Uyuni Salt Flats, came to the attention of the Fukutsu Tourist Association when officials were looking for an additional spot in the city to lure more tourists.

The association opened a website featuring the natural phenomenon in March, providing tips on how to shoot photos of it to the best effect and information on the timing of the emergence of the "mirror."

The website has attracted inquiries from overseas, and local residents have said they appreciate advice posted on it for photo shoots, officials said.

“We want as many people as possible to come to Fukutsu to enjoy the stunning view,” an association official said.