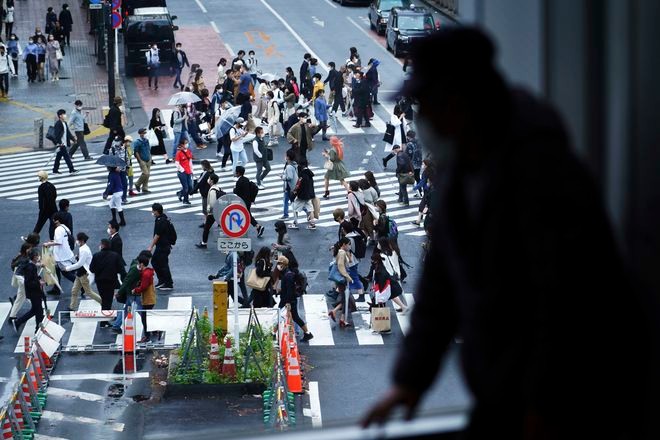 A man looks out through a window as people walk along a pedestrian crossing at the start of Japan's "Golden Week" holidays on April 29 at Shibuya district in Tokyo. (AP Photo)

Tokyo confirmed 573 new COVID-19 cases on May 10, down 135 from the 708 reported the same day a week ago, according to metropolitan government officials.

The number of cases logged on Mondays tend to be lower than other days of the week because they reflect infections confirmed about three days earlier, close to the weekend, when fewer tests are given.

The latest tally brought the daily average for the week in the capital through May 10 to 779.1, or 89.2 percent of the figure for the preceding week.

Serious cases of COVID-19 patients requiring ventilators or extracorporeal membrane oxygenation, also known as an ECMO lung bypass machine, increased by five from the previous day to 78 on May 10, officials said.