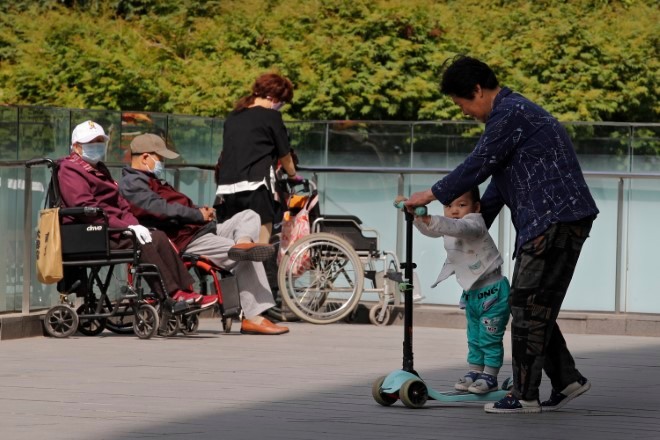 A woman plays with a child near elderly people on wheelchairs sunbathing on a compound of a commercial office building in Beijing on May 10. (AP Photo)

BEIJING--China’s population growth in the decade to 2020 slumped to the least in official records dating back to the 1950s, fueling pressure on Beijing to ramp up incentives to couples to have more children and avert an irreversible decline.

With growth having slowed ever since a one-child policy was introduced in the late 1970s, the 2020 results of the country’s once-a-decade census, published on Tuesday, showed the population of mainland China increased 5.38 percent to 1.41 billion.

That compared with an increase of 5.84 percent to 1.34 billion in the 2010 census, and double-digit percentage rises in all of China’s previous six official population surveys dating back to 1953.

The number meant China narrowly missed a target it set in 2016 to boost its population to about 1.42 billion by 2020. In 2016, China replaced its one-child policy--initially imposed to halt a population explosion at the time--with a two-child limit.

In recent months, China’s state media has been increasingly bleak on the outlook, saying the population may start to shrink in the next few years. The United Nations predicts the number of people living in mainland China will peak in 2030 before declining.

But in late April, the Financial Times newspaper said the population actually fell in 2020 from a year earlier, citing unidentified people familiar with the matter.

The 2020 number was actually slightly higher than the 1.4005 billion in 2019 estimated in a smaller official survey released in February last year.

China has long worried about its population growth as it seeks to bolster its economic rise and boost prosperity.

One bright spot in the census data was an unexpected increase in the proportion of young people--17.95 percent of the population was 14 or younger in 2020, compared with 16.6 percent in 2010.

“A sharp decline in the number of births is a sure thing, and all kinds of evidence support this claim,” said Huang Wenzheng, a demography expert at the Center for China and Globalization, a Beijing-based think-tank.

“It doesn’t take published census data to determine that China is facing a massive drop in births,” Huang said. Even if China’s population didn’t decline in 2020, the expert said, “it will in 2021 or 2022, or very soon.”

Urban couples, particularly those born after 1990, value their independence and careers more than raising a family despite parental pressure to have children.

Surging living costs in China’s big cities, a huge source of babies due to their large populations, have also deterred couples from having children.

“Having a kid is a devastating blow to career development for women at my age,” said Annie Zhang, a 26-year-old insurance professional in Shanghai who got married in April last year.

“Secondly, the cost of raising a kid is outrageous (in Shanghai),” she said, in comments made before the 2020 census was published. “You bid goodbye to freedom immediately after giving birth.”