Taiwan fights to attend WHO meeting, but China says no 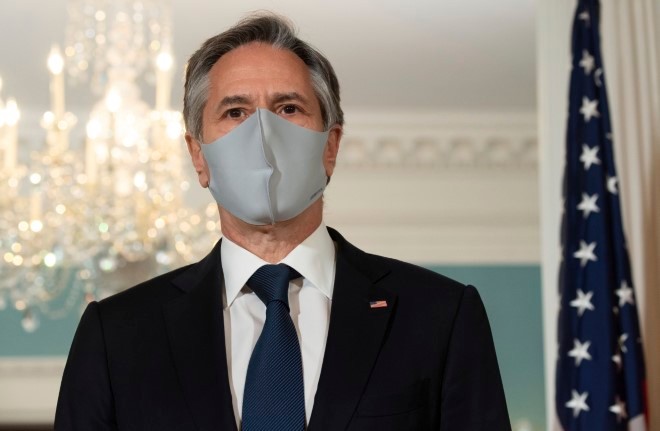 Secretary of State Antony Blinken speaks to the media prior to a meeting at the State Department in Washington on May 10. (AP Photo)

TAIPEI--Taiwan will fight to the end for an invitation to a World Health Organization (WHO) meeting this month, its foreign ministry said on Monday, but China said there was no room for compromise over the island that Beijing claims as its own.

The rich-nation Group of Seven (G7) has called for Chinese-claimed but democratically-ruled Taiwan to attend the WHO’s decision-making body, the World Health Assembly, which meets from May 24.

U.S. Secretary of State Antony Blinken reiterated that on Sunday and Taiwan says it is urgent during the COVID-19 pandemic.

Taiwan Foreign Ministry spokeswoman Joanne Ou said they had yet to receive an invite.

“But the Foreign Ministry will continue to work together with the Ministry of Health and Welfare to fight to the last minute and do everything possible for our right to participate in the meeting,” she said in a statement.

Taiwan is locked out of most global organizations such as the WHO due to the objections of China, which considers the island one of its provinces not a country.

While the WHO cooperates with Taiwan’s technical experts on COVID-19, it is up to member states whether to invite Taiwan to observe the WHO meeting, the WHO’s principal legal officer Steve Solomon said at a news briefing on Monday.

Such an invite would need a vote, and China can easily corral enough friendly countries to block it, according to diplomats.

Chinese foreign ministry spokeswoman Hua Chunying condemned the United States for its “political manipulation” of the issue, and said Taiwan had to accept it was part of China if it wanted access to global bodies, something the government will not do.

“I want to emphasize once again that the Taiwan issue concerns China’s core interests. China has no room for compromise,” Hua told reporters.

Taiwan says it is nonsense for China to claim it has the right to speak for it on the international stage when Beijing has no say in how it is governed.

The WHO says it has cooperated with Taiwan during the pandemic and that the island has received help needed.