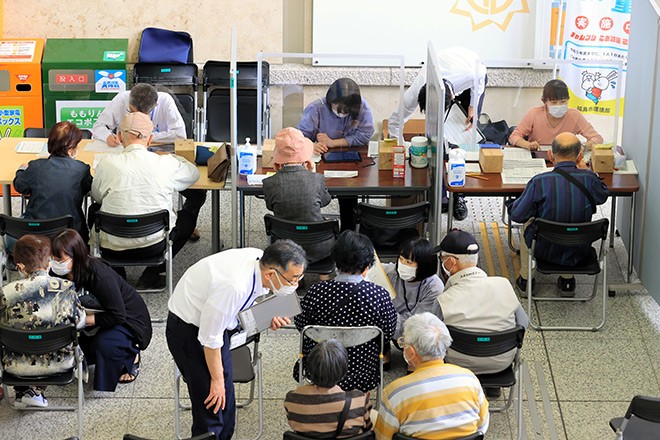 “Confusing” and “infuriating” have quickly joined the list of words of criticism against the government’s COVID-19 vaccine program, which has already been described as sluggish and ill-prepared.

Many local governments around Japan began accepting vaccination reservations from senior citizens over the phone or internet on May 10.

But the limited supply of vaccines and the “first come, first served” nature of the reservation system led to a flood of calls and overwhelmed internet connections.

Many callers only got a busy signal, sometimes for days.

An 83-year-old woman who lives by herself in Tachikawa, western Tokyo, does not have a computer or smartphone. She also has no one she can depend on to make a reservation on her behalf.

She tried calling from May 6 when the city government began taking reservations, but she still had not succeeded as of May 10.

“I may try again at the end of this month,” the woman said. “I will have to be resigned if I come down with COVID-19 in the meantime.”

In nearby Higashi-Kurume also in western Tokyo, about 30 senior citizens who could not get through to the phone reservation system gathered at the city government building.

A 70-year-old man in the group said he called about 30 times from 9 a.m. when the phone reservation system began but could not get connected.

A city government official said that to avoid congestion, reservations were not being taken at the section where inquiries can be made.

Narashino in Chiba Prefecture also began accepting phone reservations at 8:30 a.m., but all available vaccines were taken in 30 minutes.

A 77-year-old man who could not get through by phone turned to the city government’s website only to find there were no more shots.

“My grandchild who is taking online college classes due to the pandemic will help me the next time, so I plan to use both the internet and phone when reservations begin again,” he said.

In Kawagoe, Saitama Prefecture, the limited supply of vaccines forced the city government to delay by about a month the mailing of vaccination vouchers to residents in the 65-to-74 age group.

The Kawagoe municipal government began accepting reservations from those 75 and older on May 6. Although there are about 48,000 residents in that oldest age group, the city government set a limit of about 6,200 vaccination reservations for the first round.

One city official in charge of the program said the delivery of vaccines was slower than expected.

With more than 40,000 residents 75 and older who have not even placed a reservation, the city government decided to hold off on mailing the vouchers to the next younger age bracket.

In western Japan, a programming glitch has forced the Uji city government in Kyoto Prefecture to abandon use of an internet reservation system for vaccinations. Senior citizens are now being encouraged to call, fax or mail applications for vaccine reservations.

City government officials discovered a security deficiency in the internet reservation system, which was developed by an outside contractor. They said the system will not be used for the time being.