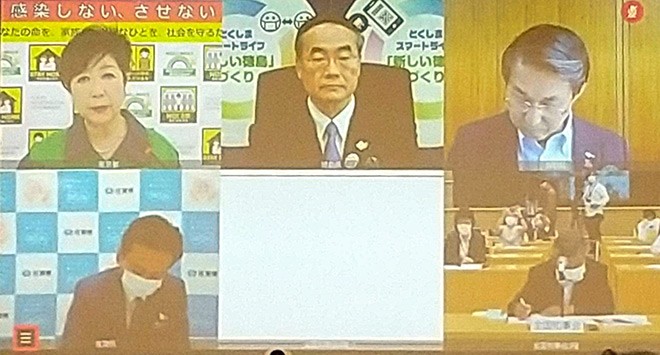 Prefectural governors discuss the response to the COVID-19 pandemic during an online meeting held on May 10. (Etsuko Akuzawa)

Prefectural governors are calling on the government to consider issuing a nationwide state of emergency amid an alarming surge in infections from coronavirus variants raging across Japan.

The National Governors’ Association set out a list of emergency recommendations to the central government at an online meeting on May 10, warning the infection situation has become so serious that expanding the state of emergency nationwide should be in the cards.

They raised concerns that the steep rise in infections is putting the health care system at risk of collapse, and urged the government to immediately move on to stronger anti-virus measures that go beyond the existing policy framework.

Ryuta Ibaragi, governor of Okayama Prefecture, which reported a record high number of new COVID-19 cases on May 8, touched on the country’s first state of emergency that was expanded in April 2020 to cover the entire nation.

“We must draw on the experience of successfully curbing the spread of the virus with that decision (to expand the emergency declaration nationwide),” Ibaragi said.

Governors of all 47 prefectures attended the meeting.

“The central government declares a state of emergency, but prefectures also need to press the government to do so,” Tokushima Governor Kamon Iizumi, who is also the president of the association, told reporters after the meeting.

The Suga administration’s latest emergency declaration, which covers Tokyo as well as Osaka, Kyoto and Hyogo prefectures, would have expired on May 11, but will be extended until May 31. The central government also decided to expand the scope to include Aichi and Fukuoka prefectures, starting from May 12.

The government on May 7 decided to expand areas covered by pre-emergency measures, but chose not to apply them to Ibaraki, Ishikawa and Tokushima prefectures, despite requests that their jurisdictions be included.

Many governors criticized that decision at the May 10 meeting.

“It’s crucial to implement (pre-emergency) measures in a timely manner when they are needed,” said Fukushima Governor Masao Uchibori. “The government should swiftly approve the measures.”

In its recommendations, the association also noted that in some cases, the government has decided not to grant governors’ requests to apply pre-emergency measures to their prefectures and expressed reluctance to approve the measures when discussing the matter with prefectural governments.

The association asked the central government to authorize governors to be able to implement the measures in their prefectures soon after they send their requests, so that they can quickly rein in the spread of infections.