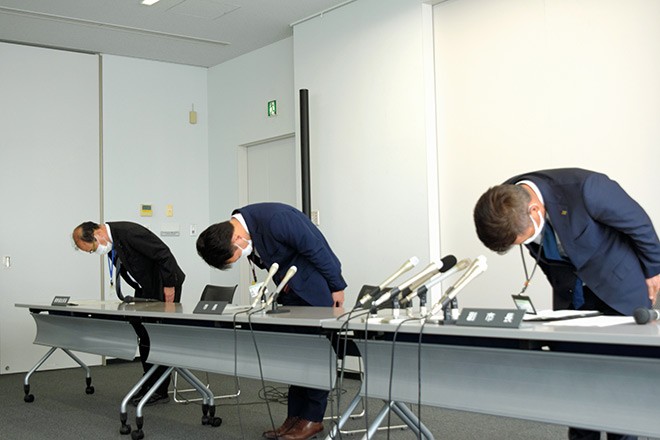 Top officials of the Nishio city government in Aichi Prefecture apologize at a news conference on May 11 for prioritizing a pharmacy company chief and his wife for COVID-19 vaccines. (Keizo Fukatsu)

NISHIO, Aichi Prefecture--The city government here apologized on May 11 for attempting to let a prominent businessman and his wife jump the line for COVID-19 vaccinations.

Nishio Vice Mayor Yoshihide Kondo said at a news conference that he tried to “do a favor” for Hirokazu Sugiura, the 70-year-old founder and chairman of pharmacy giant Sugi Holdings Co., and his wife because “the city has received assistance (from the company) in many forms.”

Takaou Yanase, manager of the city government’s health and welfare department, which manages a division in charge of the vaccination program, said a secretary at Sugi Holdings, operator of the Sugi Pharmacy drugstores, had repeatedly demanded that the city give the couple priority in receiving the shots.

He said the secretary made about three calls to the division’s manager-class personnel.

“Before that, we received several phone calls, too,” Yanase said. “I, myself, received three or four calls. The pattern continued of us saying ‘no’ and them calling back again.”

The company on May 11 also apologized to residents of the city. In a statement, the company said the secretary was worried about the chairman's wife who has a pre-existing condition.

It also said the chairman doesn't want the vaccination out of concerns he would suffer from an anaphylactic reaction.

According to the municipal government, the secretary first contacted city officials in mid-April and asked if Sugiura and his wife, Akiko, 67, an executive adviser for the company, could receive priority in receiving COVID-19 shots.

The secretary explained that the couple, both residents of the city, are pharmacists and should be considered health care workers.

A city employee rejected the request. But the Sugi secretary kept contacting the city government.

“We told Sugi from the get-go that this is a special consideration,” Yanase said. “To be honest, we wanted to refuse it. But it went beyond a regular request.

He also quoted the secretary as saying, “The chairman is looking forward to receiving a vaccination.”

Yanase said he consulted Kondo about the matter.

Kondo recalled saying, “Can you work it out?” He admitted that he instructed the health department to ensure the couple receive priority in vaccine reservations.

A tentative reservation for the couple was made for May 10, the first day of the city’s vaccine rollout for elderly people. The couple were supposed to call the division to complete the reservation.

Kondo, however, said the appointment was canceled on May 10 after a third party pointed out ethical problems with the arrangement.

“I apologize to the city’s residents for ignoring impartiality in terms of handling the valuable vaccine,” Kondo said.

He noted that the company has lent a gym for senior citizens to the city for free. He also said Sugi Pharmacy signed a comprehensive partnership agreement with the municipal government to support various projects of the city.

Asked if he would resign, Kondo said, “I want to consult the mayor about my next course of action.”

Nakamura told the news conference: “At the moment, we want to find out the truth and implement preventive measures in full force. Reprimands will be needed afterward.”

Sugi Holdings, which is headquartered in Obu in the prefecture, operates around 1,400 Sugi Pharmacy drugstores mainly in the Tokai and Kansai regions.

He is expected to step down as chairman, a post he has held since 2009, and become a special adviser this month.

(This article was written by Keizo Fukatsu and Akira Nemoto.)