Experts: SDF base could wipe out deer native to Kagoshima isle 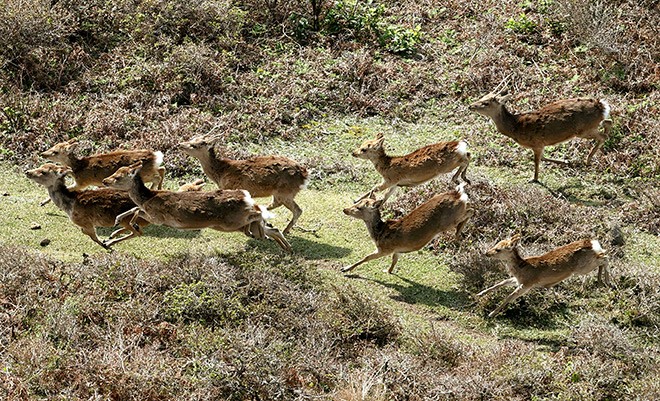 NISHINOOMOTE, Kagoshima Prefecture--A sika deer subspecies native to Mageshima island here could become extinct if a Self-Defense Forces base is built on the islet for U.S. military drills, experts said.

Experts are calling on the Defense Ministry to review the plan and provide measures to preserve the deer population.

The SDF base planned on the uninhabited island will serve as a relocation site for field carrier landing practices by U.S. carrier-based aircraft.

Under the project, two runways, training facilities and other structures will be built on a 718-hectare site, accounting for 90 percent of the island.

A Defense Ministry official, however, told a meeting with local residents, “We will study the possibility of setting aside a habitat for the Mage sika deer outside the areas for the airfield and other facilities.”

The ministry in February initiated formalities for an environmental impact assessment on the island.

The “scoping document,” which describes the items to be studied and the assessment methods, says the Mage sika deer is a “key species,” and that measures will be sought to reduce the impact on the animals and to preserve them.

Experts, however, have criticized the ministry’s plan.

The Mammal Society of Japan’s expert committee on the conservation and management of mammals submitted a “written opinion” to the scoping document, saying the Mage sika deer “are an important local population with various features and a historical character that needs to be preserved into the future.”

It called on authorities to set aside sufficiently large swaths of forests and grassland inside the project area.

“It would likely become difficult for the deer population to remain in stable existence” if they are driven out of the project area, the opinion said.

Shiro Tatsuzawa, an assistant professor of conservation ecology at Hokkaido University who has been studying the Mage sika deer for three decades, also sounded an alarm about their chances of survival.

“Turning 90 percent of the island into the project area would immediately increase the risk of extinction,” he said.

Tatsuzawa on March 10 boarded an Asahi Shimbun helicopter for an aerial study of the Mage sika deer, including their number, distribution and sexes. He estimated 320 deer lived on the island.

He used a similar study method in 2011, when he estimated the deer population at around 280. That was down from his count of 570 in 2000, when he landed on the island for the survey.

Tatsuzawa said the deer population had shrunk partly because a company that owned the island cut down trees and prepared land plots for development during the 2000s.

Although the estimated deer population has slightly increased since 2011 because no large-scale development projects were implemented, the deer numbers are still a far cry from their pre-development project levels, he said.

He also pointed out a further deterioration in the habitat environment, including an increase in bare land, since the previous airborne observation.