VOX POPULI: Is Suga’s promise of 1 million jabs a day just pie in the sky? 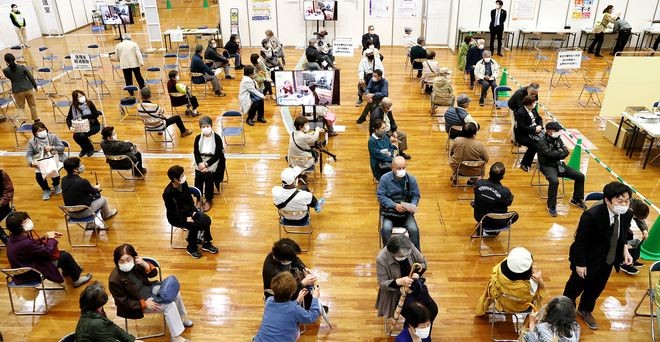 Legend has it that while an epidemic raged in Kyoto in the final years of the Kamakura Period (1185-1333), a high priest at Chionji Temple successfully brought the pestilence under control by reciting a "nenbutsu" Buddhist invocation 1 million times over seven days on Emperor Go-Daigo's (1288-1339) orders.

From this lore originated the liturgy of "Hyakuman-ben Nenbutsu" (literally, 1 million times invocation), which has the laity sitting in a circle to recite a prayer while passing around a string of "juzu" prayer beads longer than 10 meters.

The ritual has continued to this day in various parts of Japan, with the faithful intoning, "Ekibyo taisan" (Epidemic be gone) and "Kanai anzen" (Peace to my household).

"One million times a day" has become Prime Minister Yoshihide Suga's new goal for inoculating the public against COVID-19. He appears to have arrived at that number after setting the end of July as the deadline by which all senior citizens should have received two vaccine shots each.

But exactly how he intends to execute his plan is anyone's guess.

Confusion continues daily for anyone seeking a vaccination appointment. Phone calls aren't going through because of the extremely high volume of callers trying to make reservations by phone, and frustrated seniors are turning up at city offices in droves to seek help.

Mass vaccinations for seniors have only just begun, and the number of shots given per day is still below 50,000. To abruptly order vaccine administrators now to raise the number to 1 million will only make them feel even more overwhelmed.

Come to think of it, the prime minister has made commitments and promises, time and again.

He declared during his inaugural news conference last autumn, "I intend to secure enough COVID-19 vaccines to go around for all Japanese citizens by the middle of next year."

And on the day that he declared a state of emergency in January, he pledged to "improve the situation in one month, without fail."

But none of his promises have been fulfilled.

When will I get my turn for a shot? Basing my calculation on the premise that I will be the last adult in Japan to be inoculated, my turn will come in October, assuming the "1 million times a day" formula actually works.

But if worse comes to worst and the present pace of vaccination continues, I won't get my shot until four years from now--so far in the future, it makes my head spin.