Out-of-print book by hibakusha doctor set to be republished 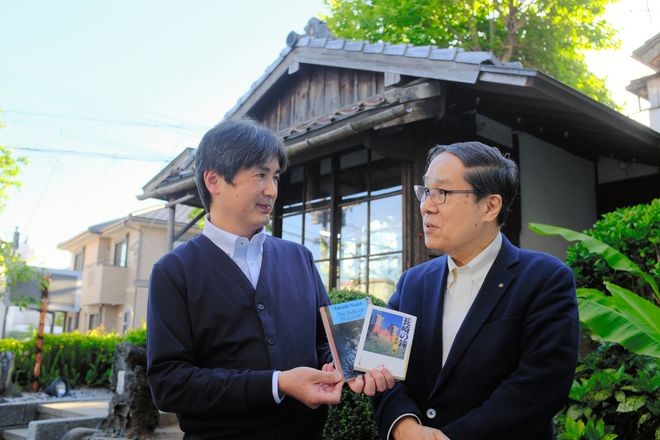 Tokusaburo Nagai, left, a grandson of Takashi Nagai, and Masao Tomonaga are in front of the Nyokodo house of Nagai in Nagasaki’s Uenomachi district. (Mizuki Enomoto)

NAGASAKI--Seventy years after his death, the family of the late Dr. Takashi Nagai is reviving an out-of-print English version of a famous book he authored about his experiences living through the atomic bombing of Nagasaki.

They aim to preserve the wishes of the late physician, who devoted himself to rescue operations in the aftermath of the 1945 atomic bombing even as he too suffered as a hibakusha, or atomic bomb victim.

When the bomb detonated, Nagai was at a hospital affiliated with what is now the Nagasaki University’s School of Medicine, which stood just 700 meters from the blast center.

The Aug. 9 atomic bombing that year left him seriously injured while his wife, Midori, was killed in the catastrophe. But Nagai kept working to help many hibakusha survivors.

As a radiology researcher, Nagai had been exposed to radiation for prolonged periods, and in June 1945, he was diagnosed with chronic myelogenous leukemia.

After World War II ended, Nagai recuperated at a small house called Nyokodo and wrote a number of works, including “Nagasaki no Kane” (The Bells of Nagasaki), which he hoped would convey the senselessness and futility of nuclear weapons and war.

His bereaved family and family friends are now working on getting the English edition of “Nagasaki no Kane,” which is out of print, republished.

“Nagasaki no Kane” vividly portrays the scenes that Nagai encountered as he helped wounded people. He describes how the medical center’s facility was severely damaged by the attack and how people struggled to recover from the despair of losing their families and friends at the same time.

According to Tokusaburo Nagai, 55, a grandson of Nagai who serves as director of the Nagai Takashi Memorial Museum, “Nagasaki no Kane” was translated into nine languages, including English.

The English version, released in 1984, fell out of print about a decade ago, but that does not mean there is a lack of demand for it.

The museum has found it difficult to meet requests from international visitors who want to read the title in English.

Because of that, a nonprofit group called Nagasaki Nyoko no Kai, comprised of Tokusaburo and other people close to Nagai, proposed reintroducing the English version.

Nyoko no Kai discussed the matter with the monastic order to which the late priest who did the original translation belonged, so that 3,000 copies of a new English edition can be released based on the older version.

The costs for printing the new book, which will also show the original Japanese text, are expected to be covered by donations from group members and graduates of what is now Nagasaki University’s School of Medicine, where Nagai had studied radiology.

“Nagasaki no Kane” proved popular and was even turned into a pop song with the score written by composer Yuji Koseki. The story was also made into a film.

In the book, Nagai writes that wars amount to nothing short of mankind’s suicide given the existence of nuclear weaponry.

“The argument is still as significant as in the past,” said Masao Tomonaga, 77, a hibakusha physician whose father, also a doctor, cared for Nagai.

The two families were close to each other.

Tomonaga said he clearly remembers Nagai lying listlessly while he was alive. He read “Nagasaki no Kane” during his high school days and was “really shocked” to learn that Nagai was suffering from leukemia.

Tomonaga pursued a career as a hematologist so he could research the effects of the atomic bombings on hibakusha like his father.

“Dr. Nagai led me to my current career,” said Tomonaga.

Advances in technology after Nagai’s passing have made it easier to protect researchers from exposure to radiation and treat patients with leukemia. But Tomonaga underscored that bombing victims suffer for life.

“Cancer development stemming from radiation exposure continues throughout one’s life,” he said. “That is the ultimate inhumane aspect of nuclear weapons.”