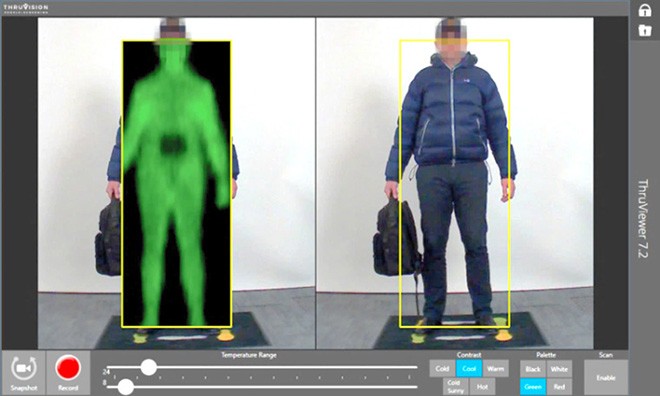 A concealed object is detected under the jacket of an individual. (Provided by Cornes Technologies Ltd.)

The transport ministry is pushing plans to give railway personnel the authority to inspect the belongings of bullet train passengers, a move intended to prevent possible terrorist acts during the Tokyo Olympics.

Ministry officials are seeking to revise a ministerial order so the new security measures can start on July 1. The Summer Games are scheduled to start later that month.

The revision plan stems in part from an incident in June 2018, when a man on a Tokaido Shinkansen bullet train stabbed three passengers, one fatally.

The law related to railway operations currently has no provisions about inspecting passenger belongings.

With the revision of the ministerial order, railway companies will be given the authority to conduct such checks and to remove uncooperative individuals from stations and trains.

Body scanners will be installed at entrance gates, and individuals detected with suspicious objects will be asked to step aside and cooperate with an inspection of their belongings.

Sniffer dogs will be also used at railway stations to detect explosives.

According to sources, the new measures will not mean every potential bullet train passenger will have their belongings inspected.

It would be very difficult for railway companies to enforce the wide-ranging security measures that are seen abroad, given the very tight schedules for bullet trains.

In addition, the huge numbers of passengers who commute on trains in Japan prompted the ministry to focus on bullet trains and major stations, not the slower train lines that operate in metropolitan areas, the sources said.

Railway companies had mixed views of the expected changes.

“Once the rules are set, we will take every possible measure in terms of security technology and methods to narrow down possible individuals who should be checked for dangerous items,” an official with East Japan Railway Co. said.

However, an official with Central Japan Railway Co. said it would be difficult to carry out the proposed measures because of the limited space around station entrance gates and the inconvenience such checks could impose on passengers.

But the official added that further studies would be conducted to detect suspicious individuals while maintaining the convenience of train travel.