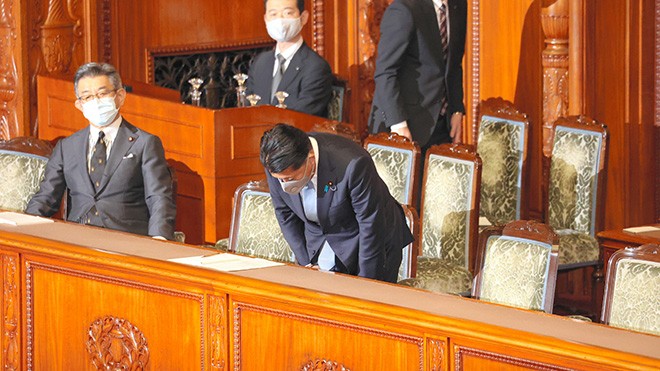 Takuya Hirai, minister of digital transformation, bows when a package of bills related to digital reform was passed by a May 12 plenary session of the Upper House. (Koichi Ueda)

The Diet enacted a raft of bills on May 12 that will streamline how governments in Japan handle and share data and revise how personal data is protected under the law.

But opposition critics argued that the ruling coalition failed to address problematic loopholes in its rush to push the bill package through the current Diet session. Some have even warned parts of the revisions could relax rules surrounding personal data in some jurisdictions.

Among the sizable package of 63 related bills is Prime Minister Yoshihide Suga’s pet project, legislation that would establish a new agency in charge of digitizing administrative procedures.

Suga’s Liberal Democratic Party made it a top priority to get the bill passed by the Diet before the current session ends in June and the LDP presidential race begins in September.

The agency is scheduled to be established in September, and while it will be overseen by digital transformation minister Takuya Hirai, the government is considering seeking a professional from the private sector to become the agency’s highest-ranked bureaucrat.

The agency will consolidate information systems that differ from one government ministry to the next, as well as among local governments, so they use consistent, unified formats.

The reform is expected to accelerate the sharing of data by breaking down barriers across departments and organizations.

Meanwhile, the bill that would overhaul the personal information protection law is designed to unify three relevant laws set out separately for the central and local governments, central government-affiliated organizations and the private sector.

The revision is intended to allow local governments to provide personal information to the private sector after the data is processed so individuals’ identities are protected.

But after Diet debate began over the bills, many errors surfaced due to a lack of sufficient preparation on the part of the government in sponsoring the bills.

The central government is seeking to share processed personal data with local governments and the private sector to help create new administrative services and businesses.

But some have raised concerns about the potential for a leak of personal data in categories not subject to release and use under the law.

Local governments have a long history of dealing with the protection of personal information compared with the central government.

But unifying rules and procedures across the central and local governments is expected to make some municipalities that have beefed up data-protection bylaws go along with the new setup, leading some critics to call it a move that will “ease regulations on personal information.”

When the legislation goes into force, the Personal Information Protection Commission (PPC), an extra-ministerial board of the Cabinet Office, will be the sole body responsible for monitoring and overseeing the appropriate handling of data by all entities, including governments.

The central government is planning to allocate more staff to the commission, but some experts fear it may not be properly equipped to fulfill its role.

One of the related laws is intended to make the provision of official benefits smoother by linking the “My Number” tax and social security identification system with citizens’ respective bank accounts.