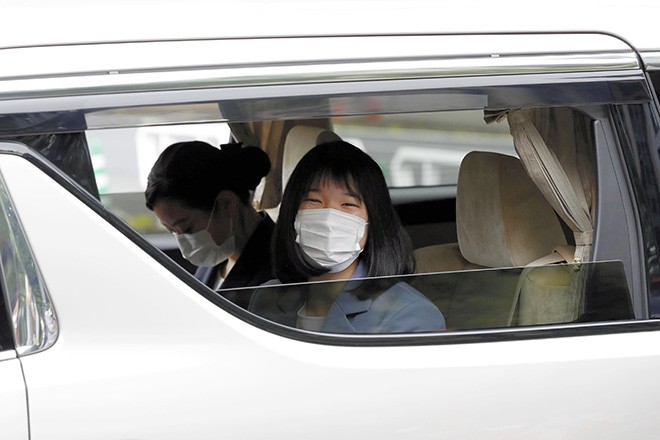 Princess Aiko visits the Imperial Palace in Tokyo on May 6 to say goodbye to her favorite riding horse, Toyoyoshi-go. (Pool)

Princess Aiko, the only child of Emperor Naruhito and Empress Masako, visited the Imperial Palace in Tokyo to bid a fond farewell to her beloved riding horse before its retirement.

A car carrying Aiko, 19, entered the palace on the morning of May 6, a day after the Golden Week holidays ended.

She goes out less frequently these days due to the COVID-19 pandemic, but made the visit at her own wish to meet Toyoyoshi-go, a stallion kept by a division at the Imperial Household Agency in charge of taking care of riding horses and carriage horses.

“She can’t travel far from home amid the pandemic and has no idea when she can meet Toyoyoshi-go again,” said a close aide of the princess. “She may have wanted to directly express her gratitude to the horse (before he leaves the Imperial Palace stables).”

Toyoyoshi-go (literally, rich joy) was born in 1997 at the Imperial Stock Farm in Tochigi Prefecture. Naruhito and Masako named the stallion after his mother, Ahazeej-go, which means “song of joy” in Arabic. The imperial couple received her from the King of Oman as a gift during their visit to the Middle East in 1994 as crown prince and crown princess.

Aiko has ridden Toyoyoshi-go many times since she was little. The stallion became her riding horse as he is gentle and smaller than other horses, making him easier for women and children to ride, according to the Imperial Household Agency.

Toyoyoshi-go has served mainly as a riding horse since being moved into the Imperial Palace stables in 2000. A jockey rode him at a traditional equestrian event in 2015 to celebrate Emperor Emeritus Akihito and Empress Emerita Michiko both turning 80.

The horse, which is around 80 years old in human years, will be transferred to the Imperial Stock Farm to spend his final years.

Aiko visited the stables with Masako, who finished a traditional imperial ceremony to mark the start of the year’s sericulture the same day. Aiko appeared to be talking fondly to Toyoyoshi-go as she fed him carrots and stroked his nose, according to her close aide.

Just like Masako, Aiko is known for her love of animals. She walks her dog, Yuri, and has raised silkworms since elementary school days. Her high school graduation paper is titled, “Cats and dogs in the Heian Period through literature.”

Aiko, now a sophomore at Gakushuin University in Tokyo, has been taking classes remotely due to the pandemic.