Centenarian beats COVID-19 with supportive doctor at her side 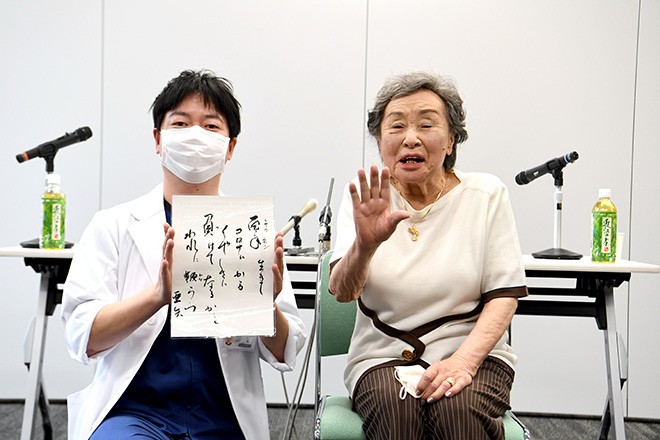 Ayako Ito, right, recovered from COVID-19 with the help of her doctor, Taku Yamaguchi, left. The photo was taken at the Shiga prefectural government office in Otsu on May 10. (Kenta Sujino)

OTSU--Centenarian Ayako Ito is healthy and ready to celebrate her 101st birthday in June after a month-long bout with COVID-19, thanks to a positive attitude and the support of her doctor.

Ito, an Otsu resident, attended a news conference at the Shiga prefectural government office on May 10 to talk about her uplifting recovery.

She had to be hospitalized for a month and her condition even worsened at one point.

“I trusted my doctor and depended on him completely,” Ito said, adding that it was important to have a strong will to overcome one's own difficulties.

Ito initially had only a cough, but from around the third day at the hospital, she developed a fever of around 38 degrees. Her peripheral oxygen saturation level was dropping, so she was hooked up to oxygen and treated with steroids.

After about two weeks, she did not need to be administered oxygen. Ito went into rehab and was released from the hospital on Feb. 5.

“I have no idea why or how I got infected,” she said. “I was three times more careful than others.”

She said that she had great confidence in her doctor and tried to remain strong mentally, as COVID-19 poses an especially severe health risk to older patients.

“Ito had been healthy before she got infected,” Yamaguchi said. “She often tried to talk and kept a positive attitude all the time.”

He believes that she recovered well mainly because of self-encouragement and positivity.