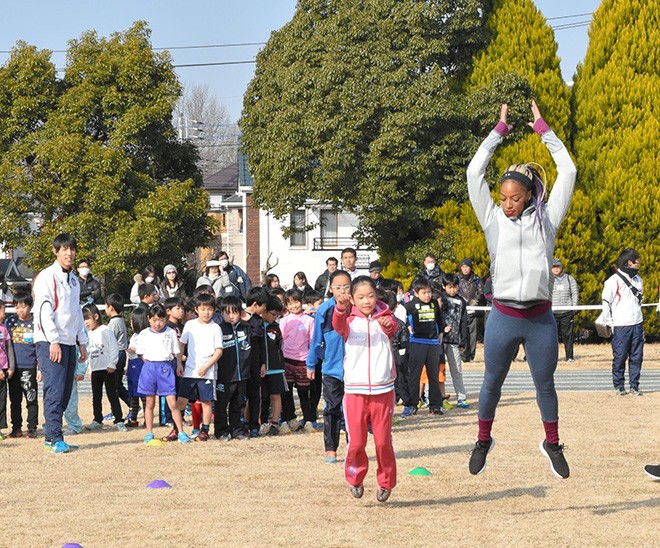 Children in Narita, Chiba Prefecture, participate in a track and field clinic with Olympic medalists from the United States in January 2018. The city was expected to host Team U.S.A. before the Tokyo Games this summer. (Asahi Shimbun file photo)

CHIBA--The prefectural government announced on May 12 that USA Track & Field canceled its pre-Olympic training camp scheduled in three local cities over fears of athlete safety amid the pandemic.

Three cities in Chiba Prefecture--Narita, Sakura and Inzai--reached an agreement with the track and field organization in May 2016 to host about 120 U.S. athletes ahead of the Olympics.

Prefectural officials said the USATF's plan to have a pre-Olympic training camp there remained unchanged after the announcement of postponing the Tokyo Games last spring, and the government had prepared to host the team.

But the USATF has changed its mind.

Prefectural officials were informed on April 14 that the USATF canceled the training camp amid growing concerns over the safety of the athletes as the pandemic rages on.

Chiba Governor Toshihito Kumagai said in a statement it is “very unfortunate” that the camp was canceled.

“But I think the U.S. Track and Field decided it is the best strategy,” he said.

Several other pre-Olympic and Paralympic training camps scheduled in the prefecture have also been canceled, the prefectural government announced.

The city of Urayasu was expecting to host 35 people from the British Paralympic wheelchair basketball team.

The town of Yokoshibahikari had expected to host 11 athletes from Belize, while the town of Nagara expected to welcome 76 people from the Russian fencing team.

As of May 1, the prefecture and 13 cities were still expected to welcome teams from 12 countries for training camps.